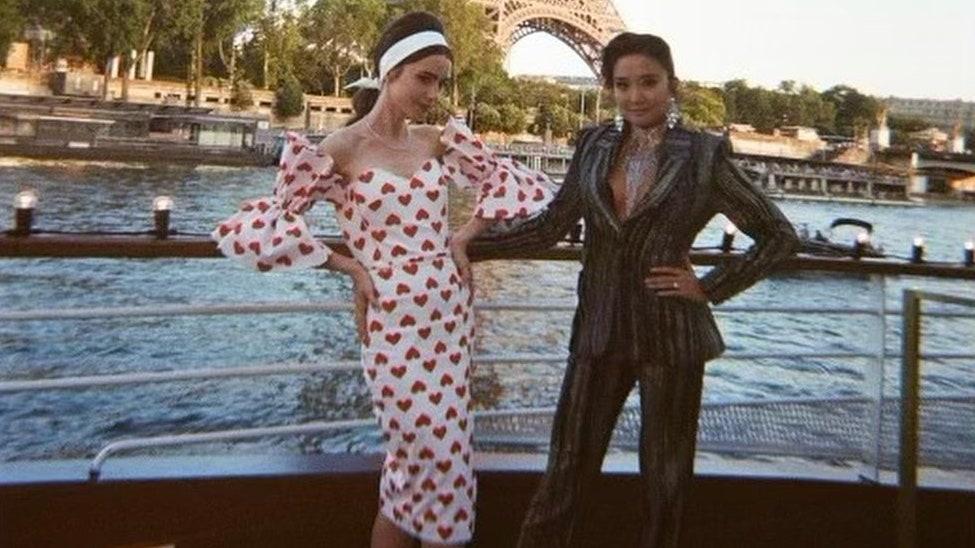 Facebook
Twitter
Google+
Pinterest
WhatsApp
Brace yourselves, Emily In Paris is about to take over your social feeds again. The love-it-or-hate-it Netflix show is set to return to screens in December but, in the meantime, honorary Parisienne Lily Collins is sharing behind-the-scenes snippets from the set. From the looks of Instagram, Emily’s new wardrobe follows the same kitsch approach to the city’s offbeat chic fashion.

The actor posted a picture alongside her co-star Ashley Park in front of the Eiffel Tower, wearing a whimsical heart-print midi dress from Anouki with a white headband and red heels. Is the dress a subtle nod to the City of Love, perhaps? Collins aptly captioned the photo, “Queen of hearts.”

The costumes in season one became a hot topic shortly after the show aired. Some criticized the clothes as very un-French girl, such as Mathilde Carton, who told Vogue, “From a fashion point of view, they are too bright, too showy, too cartoonish, and not versatile enough to be worn through the day.”

Supporters, on the other hand, praised costume designer Patricia Field’s bold choices and loved her colorful interpretation of the nonchalant style Paris is known for. Whether you’ve got your popcorn at the ready to binge watch the show or you’re avoiding it entirely, all eyes are on Emily Cooper this winter.