When photographer Joe Woolhead first heard about the September 11 attacks, he rushed to downtown Manhattan with his camera. He photographed a cloud of smoke emerging from the Twin Towers while riding on a moving subway car, which was crossing a bridge before it zipped back underground. Over the next decade, he took over two million photographs of the site, from rubble to construction, and endearing portraits of the construction workers who built the One World Trade Center, which opened in 2014. Today it remains a symbol of strength, resilience, and hope.

Now a new book traces the photos and story that saw the tragedies unfold, leading up to the construction of the iconic building. Once More To The Sky: The Rebuilding of the World Trade Center is both a photo book and historical document that traces the path to building the One World Trade Center after 10 years of construction from 2005 to 2015. It will be released on September 22, coinciding with the 20th anniversary of the September 11 attacks.

The $4 billion construction project was intimately documented by writer Scott Raab, who wrote a ten-part series for Esquire starting in 2005, and Woolhead, who became the official photographer for the World Trade Center to document its historic creation.

The book features never-before-seen photos of the skyscraper’s construction alongside portraits of engineers, boardroom meetings, and blueprints. It shows the growth of the epic project, starting from one of the first photos in the book, which depicts a dystopian cloud of smoke over piles of rubble, calling to mind an image from the Second World War.

“I was working at an unconscious level as I went day to day documenting the work that was going on,” Woolhead says. “I only really began to delve into the significance of the photos after a number of years had passed, and I realized there was a bigger picture I was capturing.”

The Statue of Liberty at night with the Tribute in Light—two beams of light symbolizing the fallen towers—in the background. 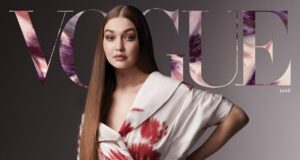 Gigi Hadid On Motherhood and Life Beyond Modeling