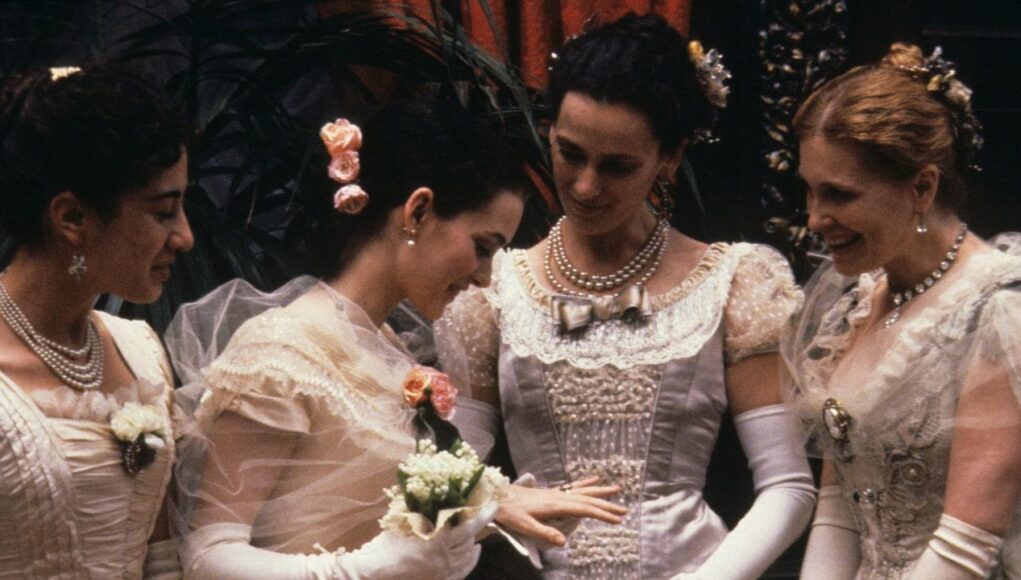 Oh, yes. Dust off Edith Wharton’s Age of Innocence and The House of Mirth. The 2022 Met Gala will ask its attendees to embody the grandeur—and perhaps the dichotomy—of Gilded Age New York. The period, which stretched from 1870 to 1890 (Mark Twain is credited with coining the term in 1873), was one of unprecedented prosperity, cultural change, and industrialization, when both skyscrapers and fortunes seemingly arose overnight. Mrs. Astor and her 400 ruled polite society until the new-money Vanderbilts forced themselves in. Thomas Edison’s light bulb, patented in 1882, alit first The New York Times building and then the entire city. Alexander Graham Bell’s 1876 telephone made communication instant—and created a demand for operators to man the lines, leading one of the first mass waves of women into the workplace. Wages skyrocketed past those in Europe (although, as Jacob Riis captured in How the Other Half Lives, far from everyone benefited). Architects McKim, Mead, and White built Beaux Arts buildings up and down Fifth Avenue, beautifying the city in the process. And in 1893, Vogue was founded with the mission of publishing the “point of view of the cultivated citizens of the world.” Original stockholders included Cornelius Vanderbilt, Peter Cooper Hewitt, and John E. Parsons—last names that still live on in New York to this day.

For the upper echelon, fashion during that period was one of excess. Thanks to recent innovations of electric and steam-powered looms, fabric became faster and cheaper to produce. As a result, women’s dresses often featured a combination of many textiles, like satin, silk, velvet, and fringe, all adorned with over-the-top textures like lace, bows, frills, and ruffles. (The unofficial edict? The more going on, the better.)

Colors were rich and deep jewel tones. Lighter colors were only worn only at home, as they were impractical while walking in the streets of New York. Hats were a necessity when going out and often were adorned with feathers. (In fact, the Audubon Society was founded in 1895 in response to protecting birds from the millinery trade.) Corsets were commonplace, and in the 1870s to late 1880s, women embraced bustles to elongate their backsides—in fact, a commonly repeated conceit was that a bustle should be big enough to host an entire tea service. By the 1890s, however, they faded out of fashion, replaced by mutton sleeves, bell-shaped skirts, and pompadour hairstyles. This aesthetic was only further popularized by illustrator Charles Dana Gibson, whose pen-and-ink illustrations of the hourglass Gibson Girl were tremendously popular in publications and advertisements.

That’s not to say that all Gilded Age fashion was formal. As leisure activities like bicycling and tennis became popular among the well-heeled set, sportswear, for the first time, became an integral part of one’s wardrobe. Many women adopted a shirtwaist ensemble—or a long skirt paired with a feminine blouse—which allowed for easier movement, as perhaps best exemplified by John Singer Sargent’s 1897 portrait of Gilded Age socialite Edith Minturn.

However parties, balls, and soirées brought out the most extravagant style this country has ever seen. The opera, which was often frequented by the upper echelon, had a strict dress code: Women put on tulle dresses exposing their décolletage, opulent fur-lined cloaks, and elbow-length gloves, while men donned top hats. The 1880s also saw the arrival of the tuxedo in America. (Urban legend has it that a man named James Potter wore the English-originated design to a country-club ball in Tuxedo Park—hence the suit style’s name.)

Outrageous costume parties thrown by the most talented hostesses of the day had frenzied and fantastical fashions. Take Alva K. Vanderbilt’s March 1883 event for her daughter, Consuelo, which became known as the most lavish celebration of the era. “The Vanderbilt ball has agitated New York society more than any social event that has occurred here in many years,” The New York Times wrote dramatically at the time. “Since the announcement that it would take place, which was made about a week before the beginning of Lent, scarcely anything else has been talked about.” Guests spent outlandish attention to detail—and amounts of money—on their outfits: Alice Claypoole Vanderbilt came dressed as an electric light bulb, which meant a white gown satin trimmed with diamonds, complete with a diamond headpiece and a light bulb as a jewelry accessory. Her sister, Mrs. Ada Smith, meanwhile, wore an outfit completely covered in peacock feathers, from the train to the fan. Another guest donned a black-and-cream-colored satin embroidered with gold stars, accompanied with a diamond necklace and hairpiece. (It’s no surprise that Fifth Avenue fine-jewelry house Tiffany began to thrive during this era.)

Time will only tell how the guests interpret the dress code for the 2022 Met Gala when they arrive to the storied museum on the first Monday in May. However, for those still mulling over their outfits—perhaps we should end on a quote, written about the endlessly ethereal Countess Olenska, from Edith Wharton’s The Age of Innocence: “Everything about her shimmered and glimmered softly, as if her dress had been woven out of candle-beams, and she carried her head high, like a pretty woman challenging a roomful of rivals.”

5 Essential Makeup Brushes To Give Your Makeup Look A Flawless...