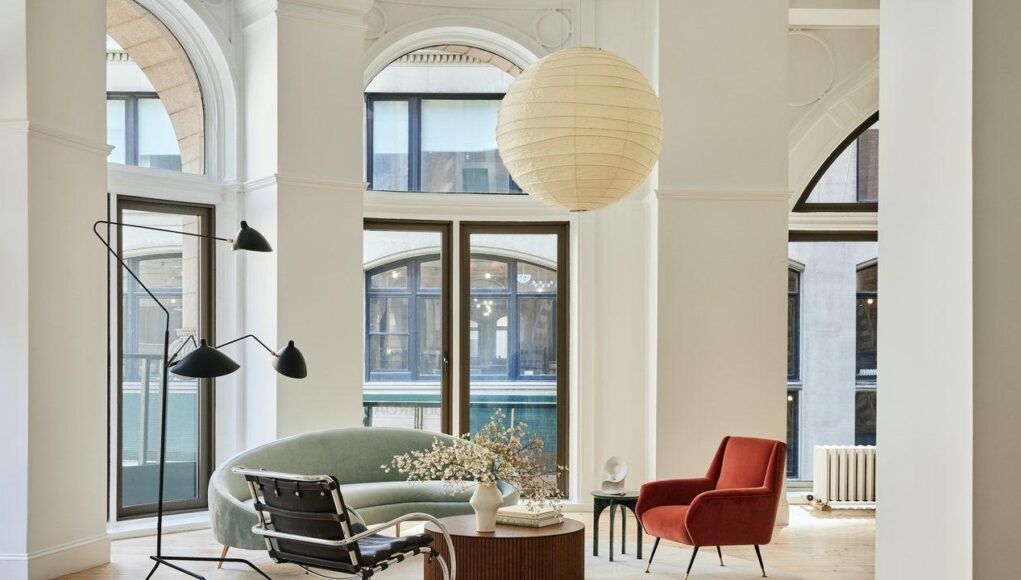 From significant business changes to noteworthy product launches, there’s always something new happening in the world of design. In this biweekly roundup, AD PRO has everything you need to know.

AD100 decorator Martyn Lawrence Bullard is well familiar with all things luxury, having designed for the likes of Tommy Hilfiger, Cindy Crawford, Cher, RuPaul, and the Kardashian and Jenner clan. Now, Bullard is putting that expertise to work for SV Casa in a lavish new line of home accessories. The collection highlights old-world glamour, with nods to Hollywood and the Palais Royal in Paris, as well as 18th-century chinoiserie. The pieces include a range of bathroom accessories, decorative boxes, and cocktails trays, all available at Harrods and LuxDeco.

Mexico City–based studio VidiVixi has entered a new chapter following the departure of its former creative director Mark Grattan. So, the release of a new, three-piece VidiVixi Lighting Series 01—a three-piece, Art Deco–inspired collection marrying glass, resin, and brass—is a momentous occasion for the brand as it transitions to a new model of working with collaborators. The brainchild of studio director Adam Caplow, Lighting Series 01 launched last month at Galerie Philia during Zona Maco.

Just in time for rising spring temperatures, on March 17, home furnishings powerhouse RH released its 2022 outdoor collection. The trove of weather-ready designs includes wicker seating from Harrison and Nicholas Condos, sculptural, corded chairs from Ann Marie Vering, and teak loungers from Mario Ruiz. Expect a range of chic and understated designs, all of which are pretty enough to stand on their own, but won’t compete with the surrounding landscape. The full range of products is now available on the RH website.

Canadian furnisher Fülhaus has announced its first-ever designer collaborator: interior designer Brady Tolbert. Curating over 600 pieces, Tolbert has culled Fülhaus product into three collections: Sinuous Forms: an Ode to Vladimir Kagan; Residency in Marfa; and the New Victorian. As its name suggests, the first of these lines pays homage to legendary designer Vladimir Kagan, and is filled with curvaceous, ’70s- and ’80s-inspired forms in bouclé, suede, and sheepskin. The Marfa collection, meanwhile, uses bright fabrics and leather, wood, and iron to evoke the raw, energetic modernism of Donald Judd’s foundation in the Texas town. For aesthetes more interested in a moodier vibe, the New Victorian offers designs in wood, brass, and velvet with black accents. “Brady pushes the envelope of home design, so working with him felt like a natural fit,” Fülhaus founder Andria Santos says. “With a focus on natural materials, earthy neutrals, and thoughtfully chosen pieces, Brady’s design aesthetic echoes this generation’s desire to return to the natural world.”

Hästens, the purveyor of Swedish luxury beds and headboards, celebrated its 170th anniversary earlier this week. To mark the occasion, the company launched its first model since April 2020. Called Drēmər (and pronounced “dreamer”), the new arrival comprises bed and headboard options by Ferris Rafauli, the same designer as the $400,000 Grand Vividus bed. Four colors are available—Traditional Blue, Black Shadow, Natural Shale, and Phantom Charcoal—as are standard and custom sizing. The Drēmər headboard starts at $27,695; bed starts at $35,790.

A New Chair of Landscape Architecture at Harvard GSD

Earlier this week, the Harvard Graduate School of Design (GSD) appointed Gary Hilderbrand as its new chair of the department of landscape architecture. The professor has been at GSD for over 30 years. Prior to that time, he was a founding principal and partner at renowned landscape architecture firm Reed Hilderbrand. Throughout his career, Hilderbrand has received accolades including Harvard University’s Charles Eliot Traveling Fellowship in Landscape Architecture, the Rome Prize in Landscape Architecture, the Architectural League’s Emerging Voices Award (with Douglas Reed), and the 2013 ASLA Firm of the Year award. He has written academic essays for a host of publications, and contributed to books such as Visible | Invisible, Reed Hilderbrand’s 2012 monograph.

The new Avenue 8 Flatiron HQ is not your average office space. Filled with trappings like a Camaleonda sofa and vintage armchairs by Gigi Radice, the Goelet Building outpost is the work of two AD100 talents: designer Billy Cotton and ASH (who handled staging). As workers all over New York head back to their desks, the loft-like Avenue 8 workspace makes a compelling case for IRL meetings.

One of Armani’s largest retail spaces has reopened, the Armani Group announced last week, following a total makeover. Originally built in 1988, the store at 436 North Rodeo Drive in Los Angeles was reimagined by the brand’s in-house architectural team. Drawing on its Californian surroundings, the design incorporates a palm tree motif, and integrates furniture, carpets, and lamps from home goods line Armani/Casa. Once inside, shoppers will encounter the Armani array, including women’s accessories and eyewear (ground floor); jewelry, evening gowns, men’s accessories and eyewear, and Made to Measure collections (second floor); and men’s seasonal collections (mezzanine). And good news for sartorial die-hards: The store will exclusively carry the Giorgio Armani Los Angeles Evening Collection as a part of its grand reopening.

Since the mid-aughts, FIAC occupied a regular position in Parisian cultural programming each fall. No more: Earlier this year, it was announced that Paris+, by Art Basel, a new fair from MCH Group, would replace it. With its head-turning name—is that “Paree-ploo,” asked NYT this week, or “Paris plus”?—and affiliation with other MCH Group events like Art Basel, it is sure to make waves in the art and design fair landscape. The contemporary and modern art event will take place October 20–23 at the Jean-Michel Wilmotte–designed Grand Palais Éphémère. Clément Delépine, an expert on the French art market and the former codirector of Paris Internationale, will helm the event alongside Virginie Aubert, the former VP of business development at Christie’s France, and Maxime Hourdequin.

Last night in midtown Manhattan, New York’s interior design community gathered for an evening of fundraising and festivities at Center 415. The occasion? The return of DIFFA By Design and its attendant gala—a major moment each year for the 36-year-old nonprofit DIFFA, which grants funds to organizations providing treatment, education, and assistance for people impacted by HIV/AIDS, homelessness, mental health issues, and hunger. Studios including Rockwell Group, Corey Damen Jenkins, Fogarty Finger, and BHDM teamed up with manufacturers like Maharam, Benjamin Moore, and Shaw Contract to construct imaginative, interactive scenes that guests could explore. The gala also included a few star RSVPs, including Jane Krakowski, Amber Iman, and Bobby Conte, among others.

Step Inside a Dublin Home Where Art Deco Architecture and Modern...