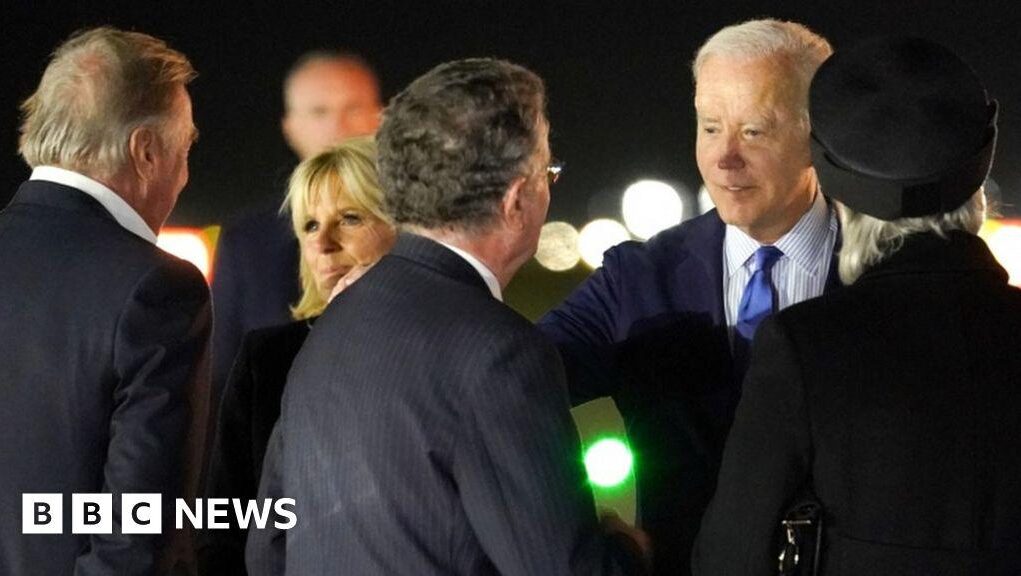 US President Joe Biden has arrived in London ahead of the funeral of Queen Elizabeth II on Monday.

Mr Biden is among some 500 heads of state and foreign dignitaries coming to London for a gathering of world leaders not seen for decades.

The prime ministers of Canada, Australia and New Zealand are already in the UK.

Controversy surrounds some of the guests invited, such as Saudi Arabia’s Crown Prince Mohammed Bin Salman.

Members of royal families from across Europe will also be present.

Many of the guests are expected to pay their respects to the Queen at her lying-in-state in Westminster Hall and sign a book of condolence at Lancaster House.

But the focus will be a formal state reception hosted by King Charles III at Buckingham Palace on Sunday.

For many leaders, it will be their only chance to meet collectively and engage in some diplomacy.

Some of the guests invited to attend the funeral have, however, raised eyebrows.

The extension of an invite to Saudi Arabia’s Crown Prince and de facto ruler Mohammed Bin Salman (known as MBS) has proved controversial.

He is accused of ordering the killing of Saudi journalist Jamal Khashoggi inside the Saudi Consulate in Istanbul, Turkey in 2018 – an accusation the Crown Prince and his government deny.

The fiancée of Mr Khashoggi, Hatice Gengiz, said he should not be allowed to attend the event and that it was a stain on the memory of the Queen.

Another invite which has led to criticism is that for China’s President Xi Jinping, due to accusations of crimes against humanity levelled at the Chinese government.

But it will not be President Xi attending the funeral. Instead, Vice President Wang Qishan will travel to the UK.

Representatives from Russia, Belarus, Myanmar, Syria, Venezuela and Afghanistan have not been invited.

Iran, North Korea (DPRK) and Nicaragua have only been invited to send ambassadors, rather than heads of state.

What time is the Queen’s funeral? And other questions

What next? A day-by-day guide from now to the funeral

Queen’s funeral plans: What will happen on the day

Who’s invited to the Queen’s funeral – and who’s not?

How Fashion Stopped Worrying And Learned To Love TikTok