Home Articles Jennifer Lopez Does Her Own Take on Bohemian Style

When I think of Jennifer Lopez’s personal style, I think of two things: athleisure, and glam. Often, there is no in-between for her—it’s either leggings and a hoodie, or a fresh-off-the-runway Versace gown. But the stylish singer stepped out in West Hollywood this weekend in a new look that falls somewhere in between these two extremes. Yes, J.Lo has offered her take on boho-chic.

Lopez’s daytime look, which she wore out with her fiancé Alex Rodriguez, had a free-spirited feel—but she did the unexpected aesthetic in her own way, of course. She wore a tiered white shirtdress with a ruffled hemline, evoking the billow silhouettes of the 1970s, and styled it with an equally-groovy shoe: a staggering pair of brown leather platform boots by Coach, which had a go-go boot feel but was still totally modern (not to mention glamorous, this is J.Lo after all). To make her outfit feel even more in the now, Lopez also accessorized her ensemble with a leather tote bag that read “Vote” on it (also by Coach), encouraging people to cast their votes ahead of Election Day on Tuesday.

So, is this officially ushering in a new style era for Lopez? Will she be rocking bell bottoms, shearling coats, and retro print blouses next? Most likely not, but the retro vibe looks good on her. 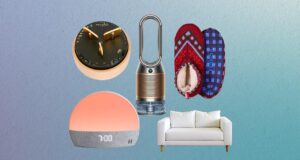 The Best Items to Help You Power Nap Soundly