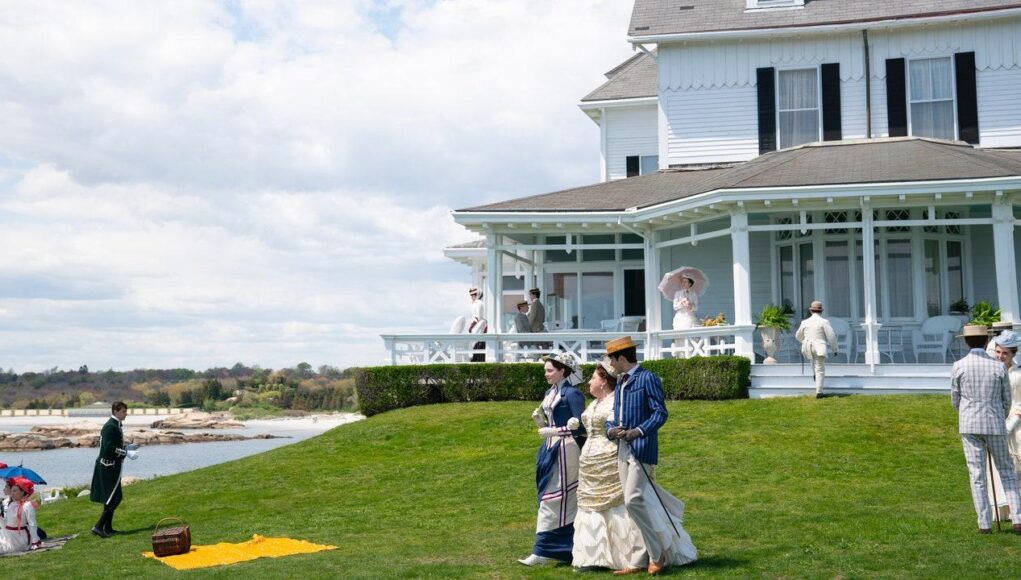 It may be an unpopular opinion, but from a design standpoint, Newport mansions are on par with their English countryside counterparts. Fans of the highly stylish Downton Abbey tend to wish they were born into English aristocracy during the elegant and luxurious Edwardian era. After all, the centuries-old manor houses on acres of lush, manicured gardens make a case for swapping iPhones and central air conditioning with a 1921 Ford Model T and a long string of pearls. But there’s no need to send your romantic imagination to Europe when there’s a perfectly extravagant golden era right here in the U.S. The Gilded Age lasted roughly between 1870 and 1910, when the simultaneous success of industries including rail, oil, and steel led the country’s economy into quite a lengthy boom.

During the economic roar, such famous families as the Rockefellers, Carnegies, and Vanderbilts moved to New York City—specifically, Fifth Avenue—and built palace-like mansions that are the backdrop to HBO Max’s new series, appropriately titled The Gilded Age. Because only a handful of the residences still stand, the aesthetically charged series was filmed in Newport, where most of New York’s elite—the Astors and the Morgans, among others—built summer houses. And unlike the few estates still standing in New York, including the James R. Turner– and William G. Killian–designed 991 Fifth Avenue, many of the ones in Newport have been transformed into boutique hotels where fans of the show and Golden Age thinkers (those nostalgic for an earlier era) can spend a few nights holed up in a sophisticated space overlooking the city’s famous Cliff Walk.

The Chanler at Cliff Walk

New York congressman John Winthrop Chanler started building his now famous home on the edge of Easton Bay at the start of the Gilded Age in 1870. The “cottage,” as he called it, was finally completed three years later and made for the perfect summer retreat for him and his wife, Margaret Astor Ward. As is the case with the world’s wealthiest set, the Chanlers eventually relinquished the home, and it became the Tolethorpe School for Girls, summer home to bishop Francis Patrick Keough, an apartment building for naval officers, and even a historical museum. Shortly after the Second World War, though, the architectural masterpiece opened as a 30-room hotel.

Today, there are 20 guest rooms and villas inspired by a specific moment in time: There are Regency, Louis XVI, Renaissance, and English Tudor rooms, all of which reflect the period for which they are named. The one amenity they all share, however, is the aromatherapy bath service, which is as relaxing as it sounds.

On Seaview Avenue, overlooking the Easton Bay, The Cliffside Inn is a 16-room Victorian mansion on the city’s coveted Cliff Walk. Like so many of the homes along the Walk, this one belonged to an influential figure, acclaimed painter Beatrice Turner, who lived in the house from 1907 until 1948. Before she moved in, though, it belonged to the man who built it, Maryland governor Thomas Swann. In fact, among the families that have called Newport home for generations, it’s still known as the Swan Villa. Briefly between Swan Villa’s two notable residents, however, the mansion was converted into a prestigious all-boys schoolhouse, St. George’s School.

If you’re wondering whether or not a hotel is as luxe as it claims to be, all you have to do is take a peek at the guest book, and Castle Hill Inn’s is worth its weight in impressive signatures. From Grace Kelly to Thornton Wilder, this shingle-style spot commissioned by marine biologist and naturalist Alexander Agassiz in 1874 is backed by decades of history. It was a summer home until one member of the family, Agassiz’s daughter-in-law, let it go. During the famous hurricane of 1938, she became so paranoid about the waterfront location of her family’s home that she left and quite literally never returned. Luckily, her absence left it free for the Allied Forces to occupy as a base.

After the war, however, the former mansion became a summer hotel, playing host to Grace Kelly while she filmed High Society in the 1950s. In fact, the inn’s rocky cove where she spent so much time is now named after her. Now, of course, the house turned hotel has been winterized, making Newport a cold-weather destination as it is a hot spot during the summer months.

If there is one Newport mansion that doesn’t quite look like its neighbors, it’s Hotel Viking, a Colonial-style brick structure known around town as “the people’s hotel.” Unlike the surrounding Newport mansions, Hotel Viking was actually built in the 1920s as a hotel, not a private home. The moment the doors swung open to out-of-town guests, it sold out. Even Johnny Cash spent a few nights in one of the guest rooms after playing at the 1964 Newport Folk Festival. Though the immediate popularity was much welcomed, it was a bit unexpected, so the Newport Wing was added shortly after Hotel Viking opened, giving visitors 208 rooms to choose from when making a reservation. Some rooms even boast clawfoot bathtubs, fireplaces, and formal sitting areas.

Though it’s adapted to a more contemporary lifestyle, the beloved historical elements remain, including the original key boxes behind the front desk, the circa 1926 brass letterbox in the lobby, and Chippendale furniture.

The Vanderbilts were only one of the famous American families to erect ornate palaces mere blocks from the Newport Harbor, but Alfred Gwynne Vanderbilt’s Georgian-style residence downtown was something to talk about. Built in 1908, the business scion’s New England castle has since been transformed into a 33-room hotel that’s somehow even more glamorous than it was in the early 20th century. There’s even a secret bar tucked into a corner of the sumptuously outfitted Doris Duke–inspired parlor.

And to honor the stylish Vanderbilt who loved to travel even further, Swoon, in charge of the downtown haunt’s design, delivered: The design firm commissioned photographer and artist Maxine Helfman to deck the walls with an exclusive eye-catching series. Plus, the hotel is decorated with a mix of new and vintage furnishings, a mix of woods, fabrics boasting dramatic patterns, custom hand-drawn wallpaper, and a moody palette throughout.

Give Your Pad A Mid-Century Modern Makeover With These 7 Retro...