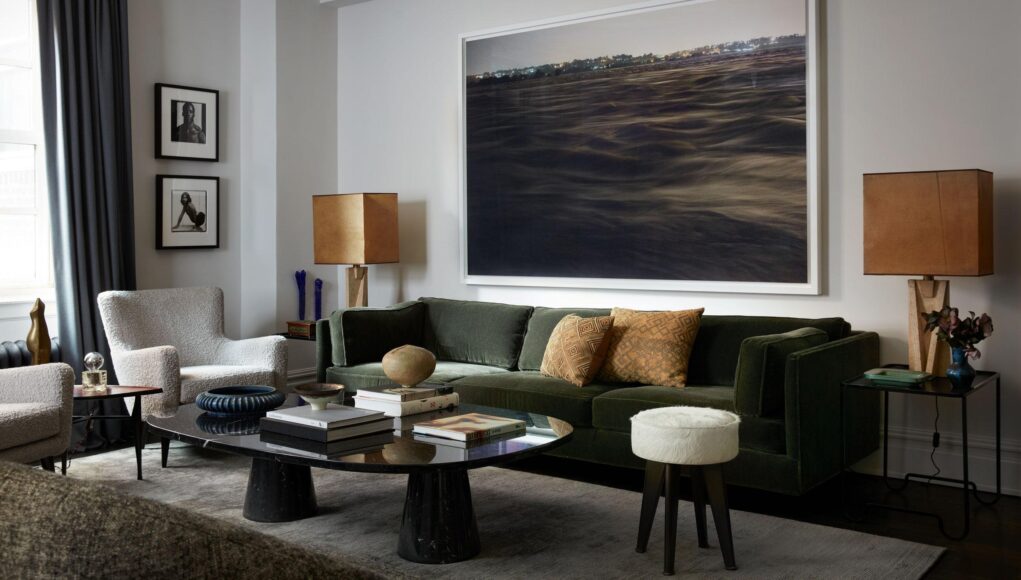 When Todd Hellmuth’s client, an entrepreneur, investor, and contemporary art collector, moved back to New York City from San Francisco almost five years ago, he knew exactly where he wanted to live—a prewar co-op on lower Fifth Avenue. He also knew exactly who he wanted to decorate it—Hellmuth, his longtime friend and one-time roommate.

It’s not standard practice to hire a designer you once lived with, but in this case at least, it certainly didn’t hurt. The New York interior designer knew his client’s taste almost as well as his own. Not to mention that the perfect one-bedroom apartment said client snapped up in a 1928 Rosario Candela-designed building was a serious step up from their former West Village walk-up where they once got egged for being too noisy. There was also one bit of added pressure: “I knew I was going to be over there all the time. The chairs had to be comfortable to sit in,” Hellmuth says.

In terms of the overall vibe, Hellmuth notes, his client wanted to create a dialogue between the apartment’s prewar architecture and his collection of contemporary art and midcentury furniture. “This is embarrassing,” he says, “but we started with a Pinterest board.” It wasn’t rocket science though. Hellmuth knew his client, from the way he lived to the way he dressed, and understood the sort of low-key, collected-over-time look he was going for.

“The first thing we bought was the sofa,” says Hellmuth, who nudged his client to cover the vintage Harvey Probber model in a dark green mohair. (He initially wanted gray.) “That pop of color flanked by the stone lamps with fiberglass shades brought some color in a simple and sophisticated way,” Hellmuth says. “I was so happy we started from there.”

Next they hit the Paris flea market, and some other vintage destinations in the South of France, scooping up clean-lined classics like a pair of 1950s Charles Ramos lounge chairs, a 1970s Angelo Mangiarotti cocktail table, and a set of 1960s Pierre Guariche for Meurop dining chairs. To stand up to the client’s growing art collection—which includes works by established and emerging artists including Diamond Stingily, Paul Mpagi Sepuya, and Wolfgang Tillmans—Hellmuth sprinkled in a few strong works of collectable design. The designer chose a dining table by Dutch talent Dirk van der Kooij made from recycled CD cases and a footstool by Israeli artist Ayala Serfaty covered in wool and silk felt.

“Because we’re so close, we were able to really take our time and find the right pieces,” Hellmuth says. “We had so much fun.” They’ve already started working on their next project: a six-bedroom house in East Hampton.