Facebook
Twitter
Google+
Pinterest
WhatsApp
With more representation than ever, stars from the K-pop world took over the City of Light for Paris Fashion Week with multiple head-turning moments made just from the first week of menswear shows for the Fall/Winter 2023 season.
One of the earlier shows this year, Saint Laurent on Jan. 17, 2023, had a double dose of boy-band power as SEVENTEEN’s Jeonghan and TEN of NCT and WayV made their Fashion Week debuts, seated alongside Wednesday star Jenna Ortega, Billboard Hot 100 hitmakers Conan Gray and Steve Lacy, as well as Korean singer-songwriter (and BLACKPINK collaborator) LØREN.
The Jan. 20 Dior Homme show was graced not only by the fashion house’s new global brand ambassador Jimin, but his bandmate J-Hope, who sat front row with the likes of Naomi Campbell and J Balvin. Afterward, Jimin told fans via Weverse that he was less nervous and could immerse himself at his first fashion show because of J-Hope’s presence. Undoubtedly, the Jack in the Box rapper brought comfort and confidence after taking over PFW, strutting through several menswear shows throughout the week, including Louis Vuitton and Hermes shows during his first Fashion Week. 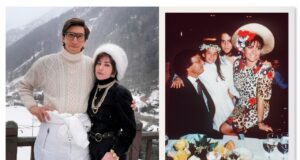 Big Shoulders and Lots of Vintage: How Lady Gaga Got Dressed...