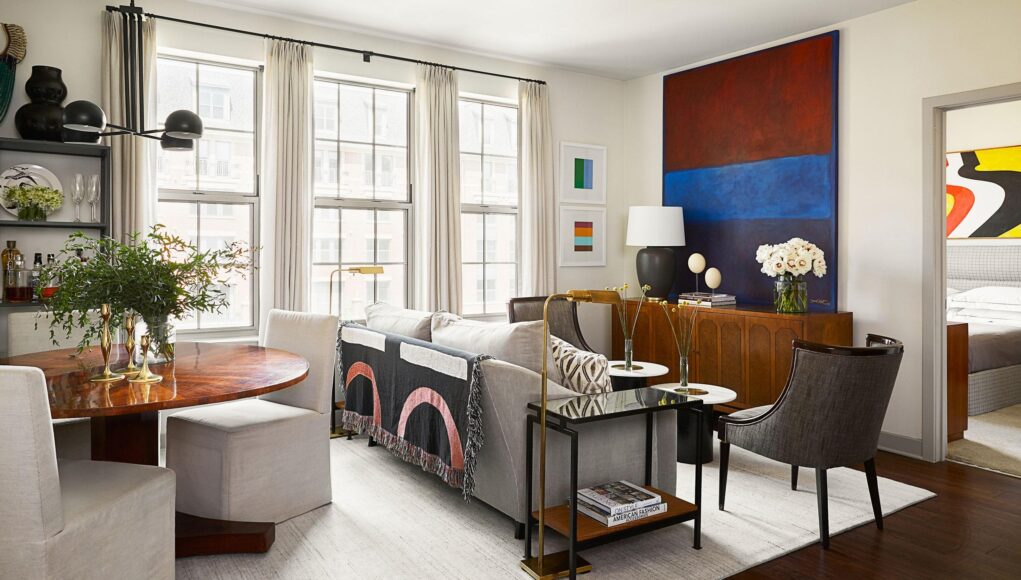 Like many elements of designer Byron Risdon’s Washington, D.C., apartment, the cabinet in his bathroom has lived many lives. Built a half century ago, it found its way to Risdon through an eBay auction for a mere $200, and has traveled with him from Brooklyn to Baltimore and finally, here, to Brookland, a neighborhood that’s home to Catholic University and swaths of Georgian-style architecture. Once, the cabinet was a buffet, displaying dinnerware on its open shelves. In Baltimore, it held court as a bar, brimming with bottles and chic glassware. In its current incarnation in the bathroom, it takes on an equally utilitarian role, holding fresh towels and antique apothecary bottles.

In many ways, the cabinet is a totem for Risdon’s entire apartment, which swells with texture and history. And, it should be said, pragmatism: Throughout its 950 square feet, the designer has deftly integrated auction finds and upcycled items—some of them finding their way to Risdon from jobs for clients. The South Carolina native calls the two-bedroom flat a “well-thought-out hodgepodge,” but don’t be fooled: Risdon’s is an elevated, elegant interior that holds together its component parts like a perfectly baked apple crisp.

Risdon poses in his living room next to a console table he purchased at Kamelot Auctions in Philadelphia. The large canvas work beside him is by Jaime Karf; the smaller framed acrylics behind him are by William Radawec. Fox Mill Lighting & Supply Co. produced the table lamp.

Because the unit is a rental, Risdon limited his interventions to the surface level, even leaving the default wall color in situ. “I was like, I’m gonna make these white walls work,” he recounts. A few easy swaps, like changing out stale light fixtures to ones the designer purchased on Lightology, helped bring the space to life—as did Risdon’s knack for finding antiques. (“I’m an auction guy,” he says with a laugh. “I love a good hunt.”)

As he developed the interior, Risdon had a few knowns in hand: Along with the bathroom cabinet, the living room sofa, purchased at a sample sale long ago, has followed him through a number of homes. A dining table and dining chairs also already existed. “I had to find a way to bridge them together, so that’s why I kept the rug neutral,” he says. “Then I just layered it with other materials.”

And layer he did. In the living room, the designer incorporated pillows made of Pindler fabric, an expansive color-field-style abstract by Jaime Karf, plus accents of brass and concrete through a pair of nesting tables from CB2. Side tables from Wayfair, initially sourced for a client project, have been reconfigured and topped with antique mirrors for a healthy dose of patinated glimmer.

For all his resourcefulness, though, there are some areas where the designer believed in making an investment: namely, the window treatments, produced by Essence Interiors in Fairfax, Virginia. “It’s like a great pair of shoes,” Risdon says. “It just finishes off the look.” In the bedroom, fabric from Kerry Joyce softly frames the windowpane view of neighboring brick townhouses. Risdon also made a textile-forward upgrade when it came to his bed. The upholstered piece was originally purchased at West Elm, but has been trimmed down and recovered with a checked Pindler fabric. “It seemed like it was what I wanted at the time, but it was too tall,” he explains. “Things like that—you sort of realize, not that it doesn’t work, but it’s not exactly where I want it, and we’ll find another way to make it work.”

This scrappy attitude also proved to be an asset in 2020, when Risdon’s business picked up during lockdown. Over a weekend, he transformed his second bedroom into a home office, installing IKEA shelves and file drawers from CB2. Though the shift was temporary—the space has since reverted to a guest room—having a dedicated work area carved out a slice of calm during a hectic (if productive) period. (A naturally tidy person, Risdon says having everything in its place brings him “peace of mind.”)

The designer sees one major difference between designing his own home and those of his clients: time. Commissioned work for others, he says, “has to come together in a shorter period of time”—and that means getting the details right on the first go-round. But in his own space, where home bars are reincarnated as towel holders, and dowdy Wayfair tables undergo Cinderella-like glow-ups, the key theme seems to be transformation. And for Risdon, that’s by design: “In my opinion, the best spaces evolve.”