In case anyone was wondering, Sophie Turner embodied the idea of a pregnancy glow.

The actress gave birth to daughter Willa, her first child with her husband, Joe Jonas, earlier this summer. For the most part, Sophie and Joe stayed out of the public eye during her pregnancy. On Sunday, however, Sophie gave fans a very intimate glimpse at her pregnancy when she shared three never-before-seen pictures from her personal collection that showed off her baby bump and her impressive pregnancy glow.

Sophie shared a total of three photos, all captioned with the same series of three emojis: A pregnant woman, the double hearts, and a sun. We can only assume this indicates that the pictures were taken when she was late in her pregnancy this summer. She also tagged Jonas’ Cup of Joe account in the photos.

In the first photo, Sophie is chilling in the pool with her dog:

The second picture is a closeup on Sophie wearing a pair of pink and white striped pajamas while a hand (which we can only assume is Joe’s) cradles her stomach:

In the final picture, Sophie basks in the sun in her backyard, clad only in a tiny bikini and a full cover of pregnancy glow perfection: 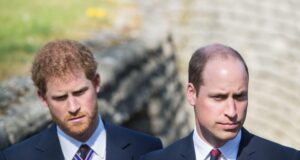