“Every single American should be wearing a mask when they’re outside for the next three months at a minimum. Every governor should mandate mandatory mask-wearing,” Biden said in Wilmington, Delaware, where he and his new running mate, Sen. Kamala Harris of California, had just received a briefing on the coronavirus pandemic.

“Let’s institute a mask mandate nationwide starting immediately, and we will save lives… Protect your fellow citizens. Step up. Do the right thing. It’s not about your rights. It’s about your responsibilities as an American,” the former vice president added. Doing so would save 40,000 lives over the next three months, Biden said, citing experts.

Harris tag-teamed his demand, saying “that’s what real leadership looks like. We just witnessed real leadership, which is Joe Biden. As a nation, we should all be wearing a mask for the next three months because it will save lives.” 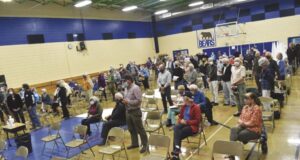