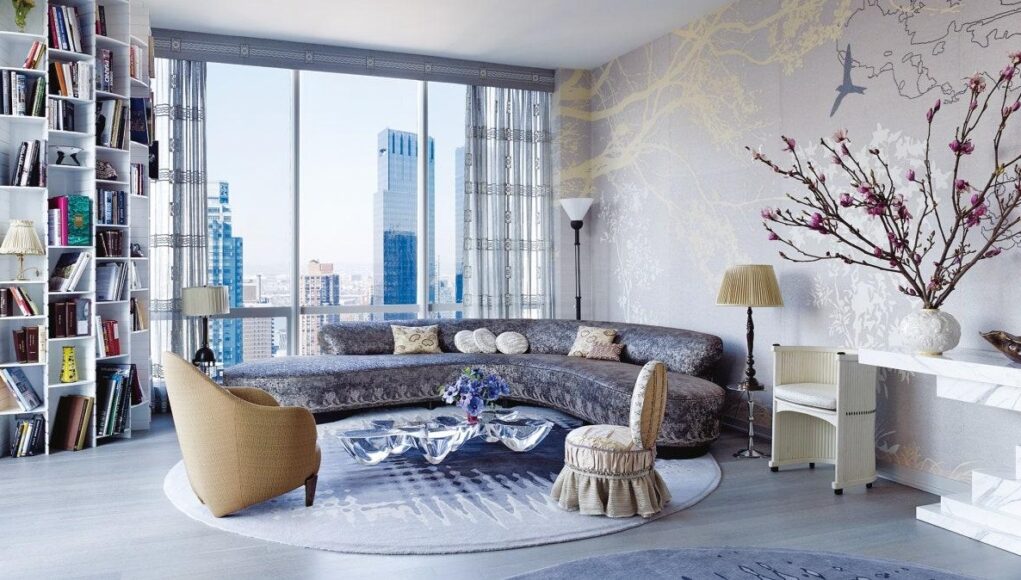 Last year, the pandemic shaped our priorities—that’s as true in luxury real estate as it was anywhere else. But 2021 saw a record year in high-end housing, with staggering deals, new emerging markets, and exciting trends in amenities.

We spoke with experts in the field to see what we can expect as 2022 unfolds.

A return to cities

Erin Sykes, chief economist and real estate wealth advisor for Nest Seekers, says reports of migration to suburban and rural areas have been “a bit overblown.” “We’re going to see at least a partial move back to cities, but it’s going to function differently,” Sykes tells AD PRO. “Now that we know we have the flexibility of working from home, or anywhere, people will hold pieds-à-terre in the city and main residences in other states.”

There can be tax advantages to being outside the city, and technology has allowed us to accomplish a lot remotely, she added, “but it’s still not a replacement for being face-to-face with your boss or pitching a concept at an in-person meeting.”

“We’re going to see a desire—not just a need—to get back to the workplace,” says Sykes. “Because it’s not healthy to sit at home all day.”

E.A. Stribling-Kivlan, senior managing director at Compass, says the pandemic has redefined what people think of as home base. They still want their apartment in New York or London, but also the option of another space to which they can easily relocate.

“We don’t think so much about second homes or ‘vacation’ homes anymore,” she said. “We’re more mobile. Working remotely means you don’t have to think, ‘Oh, I just have two weeks [of PTO to spend away from home].’ When the time is right you can go there—that’s the ultimate luxury.”

The numbers bear out his point: In December 2021, The Austin Business Journal reported that luxury homes accounted for nearly a quarter of sales volume in the Texas state capitol.

It doesn’t hurt that Austin has become another Silicon Valley, with Facebook, Tesla, Amazon, and numerous other firms expanding their presence there. Apple’s $1-billion, three-million-square-foot campus will house 5,000 employees when it opens in northwest Austin this year—with more to come. And in May 2022, Google is expected to open Block 185, a 35-story sailboat-shaped office tower that will include tenant amenities, retail, and a boardwalk, as well as a new outpost from Japanese restaurateur Uchi, according to Austonia, a local news organization.

West of downtown Austin, scenic Barton Creek continues to be one of the most expensive neighborhood in the state, and Walkup says there’s a surge of luxury home development around Lake Austin.

“It was happening before, but COVID-19 accelerated it: Because of Florida’s ‘business-friendliness,’ schools and businesses stayed open. People knew they could expect more continuity there,” she explains. “That reasoning has taken over, above and beyond the tax advantages, in the last three or four months.”

The boom of hotel-branded residences will continue in 2022, with The Standard, Waldorf Astoria, Mandarin Oriental, and E11EVEN all developing new residential properties in South Florida. (The area is already home to high-end homes from Ritz-Carlton, W Hotels, and Four Seasons, among others.)

But now other brands are entering the arena, too, with automotive, fashion, and even restaurant groups partnering with developers. According to Sotheby’s International Realty 2022 Luxury Outlook Report, there are already some 130 companies pursuing this type of investment, with at least another 40 entering the category within the next few years.

Several months ago, Bentley Motors announced the launch of its first dedicated residences, a 216-unit tower in Sunny Isles Beach, with sales starting at $4.2 million. The luxury British carmaker follows a path already driven by Porsche, Aston-Martin, and Pininfarina.

“Even if it’s not a hotel company, with a known brand you know what you’re getting,” Stribling-Kivlan tells AD PRO. “When you think ‘Porsche,’ you think ‘beautiful sleek design.’ You know they deliver a good product. Everything they do is reflected in their name. There’s a sense of security knowing you’re going to get something built to the highest level.”

These developments aren’t just for show, explains Oliver Essex, a senior sales associate at Qatar Sotheby’s International Realty. “For non-hospitality brands, residences are a way to diversify their business model and extend customer relationships,” he says. “If you’re advertising the residential product, it attracts people who love the brand. It’s not just about an apartment; it’s about a whole experience.”

Fashion companies are also eager to get involved in properties in South Florida: The just-announced Diesel Wynwood Condominium sees the Italian design company launching its first-ever luxury residential venture, with 159 residences north of downtown Miami. Units will range from studios to three-bedroom penthouses. It joins Giorgio Armani, Fendi, and Missoni in branding residences in The Magic City.

Properties like these are “an easy crutch for developers to lean on,” says UrbanDigs’s Walkup. “‘Don’t trust me, trust the brand.’ And that can also mean the lobby was done by Tommy Hilfiger, Karl Lagerfeld, or Ralph Lauren.”

Including as many amenities as possible will be the name of the game for luxury residences, says Sykes, with condominiums feeling more and more like resorts: “You can get everything you want—dog-grooming, hair salons, restaurants, bowling alleys—without leaving the building. In this day and age, we’re leaning into the familiar and safe.”

Not only that, but many luxury buyers are looking for means of connecting to local communities, through transportation, beach clubs, and access to cultural institutions.

One unusual amenity Stribling-Kivlan has seen rise to the top of buyers’ wish lists, especially in climates where ice and snow can be a scourge: Heated driveways and streets. “With everyone feeling so much pressure, it’s just a little way to make life a bit easier,” she says. Pandemic-related supply-chain issues have also made turnkey furnished properties must-haves for luxury buyers in 2022. “There’s a huge premium for single-family homes and condos that are turnkey,” says Sykes, as the prospect of remodeling during a pandemic is a turnoff for many. And many buyers are willing to shell out for it, offering 20 to 30 percent more than they do for properties that need renovation.

Cryptocurrency’s growing influence on the market

Last April, a Beverly Hills mega-mansion with a 20-foot water wall and 2,000-bottle wine cellar went on the market for $65 million—or its equivalent in Bitcoin. Then, a month later, a Miami penthouse made headlines when it sold for the equivalent of $22.5 million in cryptocurrency.

Expect more of this trend in the next year: In 2022, more businesses will support crypto-sales or accept mix-and-match currencies, according to Sotheby’s Luxury Outlook report, as both buyers and sellers become accustomed to it.

Max Dilendorf, a specialist in real estate transactions using cryptocurrencies, explains in the report that “there is an upward trend of people using digital assets to buy luxury goods. We represent a lot of clients in these transactions as lawyers and escrow agents.”

Some regions have made themselves extremely attractive to crypto-billionaires. Here, again, South Florida rises to the top of the pile. “Miami supports cryptocurrency,” says Sykes. “The mayor even takes part of his salary in crypto.”

After Hurricane Maria hit Puerto Rico in 2017, “you could get real estate for a song there,” she adds. “The crypto-crowd snatched up land and built compounds, golf courses and private airstrips.” Since then, the U.S. territory has become a tax haven for crypto-capitalists, but it’s also drawing investors looking for kindred spirits.

Cryptocurrency appeals to millennials, says Stribling-Kivlan, “and they’re the largest segment of buyers in this market.”

But don’t expect Bitcoin or Ether to take hold everywhere just yet. “New York City is not the most friendly to crypto,” says Walkup. “It’s a relatively new phenomenon. As these individuals amass wealth, that will probably change. But we’re still a long way from that.”

“With the pandemic, there’s been a focus on wellness, privacy and a sense of security,” says Stribling-Kivlan. “Forget about ‘tiny houses’—people want larger indoor and outdoor spaces.”

Homes are also more multifunctional now, she points out. “They incorporate our work spaces, schools, even the spa. And we need the space for all that, while not being right on top of each other.” Because travel has been so restricted, Stribling-Kivlan adds, a lot of high-end buyers are looking to bring nature—and the world at large—into their homes: “Maybe it’s a garden, or a yoga room, or a sanctuary space. Getting away from it all while still being home.”