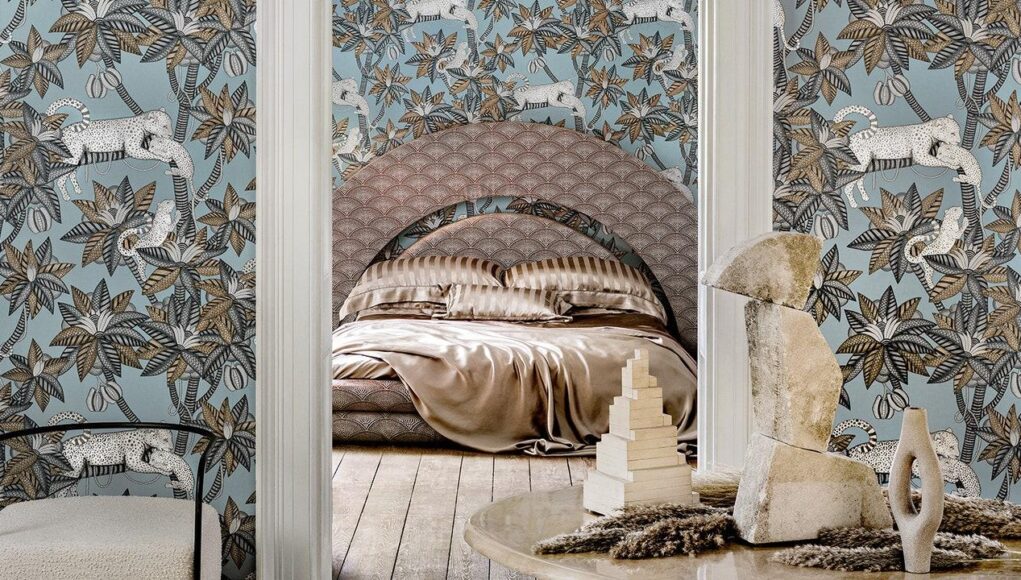 A mother leopard helps her cub climb into a tree. Elephants parade to a watering hole. Giraffes outstretch their svelte necks to nibble leaves at the tip-top of a tree, while zebras frolic nearby. These enchanting scenes of everyday life in the bush grace Jabula, the latest collection of Ardmore wallpapers produced in collaboration with Cole & Son.

According to Ardmore founder Fée Halsted, there’s an explanation for the surge of jungle spirit. But first, some background: Ardmore, for the uninitiated, debuted over 30 years ago as a ceramics company. The business was named for Halsted’s farm, located in a remote corner of the Kwazulu-Natal province of South Africa. Flash forward several decades and the studio, which today boasts more than 70 African artists, has expanded beyond its vibrant, highly collectible ceramics (all sculpted and painted by hand), with a range that includes fabrics, furniture, candles, jewelry, and even Hermès scarves.

Jabula (the Zulu word for “rejoice”) is Ardmore’s second collection with Cole & Son. Their first, which debuted five years ago, depicted Africa’s flora and fauna, as well as Zulu beadwork patterns. This new collection, however, was inspired by the pandemic and the need to adapt, isolate, and protect oneself, although it won’t be obvious to the casual observer. But look closely and “you’ll see the tortoise shell as a design feature, and a tortoise goes inward. And the pangolin, a very rare creature that is highly trafficked, which goes into itself when threatened. Or the chameleon, who has to change its color in different situations,” Halsted explains. “We had the luxury of time to go inward, look out again, and reflect on the creatures that keep the ecosystem going.”

There are 11 patterns in the collection, each based on Ardmore ceramic designs. Standouts include Letaba March, depicting animals—leopards, cheetahs, giraffes, elephants, and monkeys—sauntering to their watering hole, the Letaba River, with one option rendered on a gorgeous, textural grasscloth. Protea Garden depicts climbing vines, featuring South Africa’s national flower, the King Protea, amongst African hummingbirds (called sunbirds) and crafty chameleons.

Jabula launched in Johannesburg last month in what has become an annual event at The Cellars-Hohenort Hotel, where Halsted and her team created an immersive Ardmore experience, with ceramics set in front of panels covered in the very wallpaper they inspired. This year’s show was particularly celebratory, as it marked the brand’s in-person return after two years spent in pandemic hibernation. Halsted, without realizing the coincidence, recalls it being “a joyful occasion.”