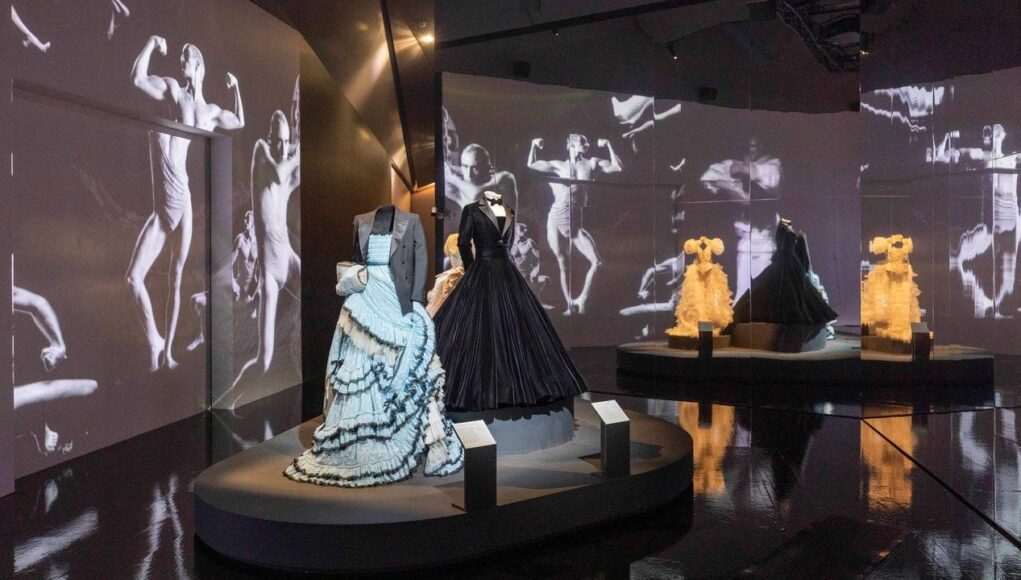 I’m staring at a giant plaster fig leaf in a cabinet at the V&A. This modesty-saving Victorian codpiece was hastily made to cover the Down There on Michelangelo’s David, shortly after Queen Victoria had been horrified at the sight of the stark naked plaster cast of the classic Renaissance sculpture—a shock she experienced in 1857, at the opening of her own museum, the Victoria & Albert.

This big, veined fake fig leaf is an opening gambit in the “Undressed” introduction to “Fashioning Masculinities: The Art of Menswear,” the new Gucci-sponsored exhibition at the V&A. It’s positioned right across from a pair of late-1980s fig leaf-printed briefs by Vivienne Westwood, a 1996 Jean Paul Gaultier trompe l’oeil Greek god torso blazer, and an installation of 2021 underwear for transgender men and transmasculine non-binary people by gc2b and Paxies.

Cleverly, “Undressed” starts us off with a confrontation with the dominant Western European archetypes of the male body. By way of an edit of the plaster-casts that began the V&A’s original art-educational collection, it argues that everything can be traced back to men comparing themselves to the iconography of classical Greek, Roman, and Renaissance sculpture. Take Hercules, with his bulging muscles: “The normalization of hyper-masculinity like this has spawned contemporary gym culture,” reads a caption (we see a 1990s Calvin Klein underwear ad nearby). Or the boyish body of Hermes: “The idolization of youth resonates in the treatment of young male models and performers.” Never a truer word, when you think of Hedi Slimane’s abiding adherence to the straight up-and-down teenage body. One of Slimane’s Dior Homme motorcycle jackets and skinny tailored trousers, with which he dramatically narrowed menswear proportions in the early 2000s, is in the show. That it looks so unremarkable 20 years later is testament to the sweeping influence of his look, for a good few years.

But this exhibition is timed to reflect on what’s currently going on in Eurocentric men’s fashion. The expansion of what is seen, felt, and being redefined around the dressing of masculine identities is the burning matter of today. Whose bodies, whose sexualities are self-actualized and centered in the mainstream beauty-contest that we call fashion? Gucci has sponsored this show, and its thrust. Emblazoned at the door is a statement from Alessandro Michele, taken from his fall 2020 collection notes: “ In a patriarchal society, masculine gender-identity is often molded by violently toxic stereotypes…It’s time to celebrate a man who is free to practice self-determination, without social constraints, without authoritarian sanctions, without suffocating stereotypes.”

The finale of the show has the Gucci ball gown that was worn by Harry Styles on the cover of Vogue in December 2020. We’re well into a gender-blurring fashion time in the 2020s, but it is also an age which insists on the presence and precision of individual voices and groups. Trans and non-binary models walk runways clothed in collections which LGBTQIA + cultures are raising to visibility. To a new generation, it goes beyond the bounds of putting men and boys in dresses. The challenge to establishment male tropes can look like a Craig Green human as metal-sculpture, hidden behind dissected bits of shirts and trousers. Or it can be Jonathan Anderson’s still-surprising, still-subversive spring 2013 collection, with its bustier, frilled shorts, and black leather boots edged with a ruffle. The show also attempts to include side-lights on how creative people of multiple non-Eurocentric heritages are ending the white-only dominance of fashion, with scattered entries from Virgil Abloh, Grace Wales Bonner, Joe Casely-Hayford, Priya Ahluwalia, and Rahemur Rahman.

The show’s second section, “Overdressed” time-travels through history to prove how what it calls flamboyance was embedded in European menswear for centuries. Fabulous wonders abound, echoed in sumptuous contemporaneous portraits. Renaissance princes in doublets and gold-embroidered capes, Cavaliers in extravagant lace collars and flowing curls, a beribboned Georgian Earl posturing hand on hip in a scarlet robe, and a two-and-a-half foot high ostrich plumed hat. “An icon of camp,” as the caption has it.

The wearing of color—pink, red, orange—in menswear had no limits, just as long as you were a member of a super-wealthy power elite. (The clothes of working people are excluded from this exhibition. When it comes to examining the social constructs of ‘maleness,’ it feels like a big omission, presumably because costume museums like the V&A only acquire designer clothes, haute couture, and antique treasures.) The decadent splendor of a guy’s clothes could eventually land him in big trouble, though. A smirking French author, Jean Cazotte, depicted showing off his gorgeous watermelon-pink silk frock coat with a pristine Flemish lace jabot, ended up sent to the guillotine by French Revolutionaries in 1792.

The show dances to and fro between that past, 20th century, and recent fashion, illustrating how cross-dressing, “effeminacy,” and homoerotic codes attached to clothes (say, wearing flowers) are nothing new. There’s a draped eau de nil spring 2021 Kim Jones for Fendi Haute Couture dress with 3D flowers—quite a puzzle until you learn it was worn by a male model, in a show inspired by Virginia Woolf’s gender-switching novel Orlando. Nearby is Nicolas Ghesquière’s gilded flower brocade 18th-century frock coat with a pair of running shorts, the opening look of his Louis Vuitton spring 2018 collection, which was a women’s ready-to-wear show, though. When womenswear designers draw on men’s garments for inspiration, does that mean the clothes still qualify as menswear? Muddled.

It’s a visual shock to enter the last room. “Redress” refers to the time in the 19th century when menswear turned black, sober, and narrowed, almost to a uniform. A cabinet full of black frock coats and suits from Edwardian times to the present day makes you realize that the sinister power of this highly segregated gendered style must have arrived with the might of capitalism and the industrial revolution. We’re still living with that, really. The love/hate relationship with the tailored men’s suit means it’s been continually under subversive reconstruction by fashion designers, including Alexander McQueen’s sharp satire on homosexual perversity lying beneath the Savile Row suit of 2009, a half-cutaway jacket and waistcoat, from whose hip hangs a single women’s stocking suspender. He called it “The McQueensbury Rules.”

It’s a pity that this exhibition doesn’t have any of the oversized things that Demna Gvasalia has done with menswear tailoring at Vetements or Balenciaga. If ever there was a warning in fashion-form about toxic masculinity and the malign power of its perpetrators, that’s surely it. But I keep returning to Queen Victoria’s fig leaf—symbolically, the first maleness-covering ‘garment’ in the exhibition. And it strikes me as something—not discussed by this show, but absolutely visible—that there were centuries upon centuries, from the middle ages through the 18th century, when European menswear fashion for men in power just kept pointing at the penis. It exaggerated it with swelling Elizabethan and Jacobean doublets and hose, and completely outlined it with cutaway coats that set off embroidered plackets on skin-tight 18th century pantaloons. The Incroyables in France and Beau Brummell dandies were satirized by cartoonists for their corseting and groin-centric trouser display.

And then, when suits came in, male genitalia completely disappeared from sight. With 19th and 20th century capitalism, it hid, safely tailored away, while men got on with causing, funding, and waging two world wars. It popped out again, briefly, during the so-called sexual revolution of the late 1960s and early ’70s, yes. But with the 1980s—and the dominance of the Wall Street suit, and even with what Giorgio Armani did to break down tailoring to a new, cool state of loucheness—the fashionably outlined penis went in again. And it’s never really come out since. Instead, the butt has, for 30 years—ever since hip-hop and McQueen’s bumsters hit in the late 1980s/early ’90s. Granted, the bulge has cropped up once in overground fashion recently—in the cross-laced underwear and jeans that young Ludovic de Saint Sernin has so successfully made his signature. But that is it.

Should a man walk along a street today in pantaloons as tight and as placket/packet decorated as the ones that young Colonel Fletcher wore to Queen Victoria’s coronation in 1838 (they’re an amazing sight) he would likely attract boggling attention. Because in 2022, the male groin has become a no-mention fashion zone. At a time when we sincerely believe that men’s fashion and our ideas about the extensive spectrum of masculinity are radical, liberated, free, and accepting, are we really?

A good thing about a museum fashion exhibition like this is that it provokes loads of questions and disagreements. One thing I think I know now: Queen Victoria might have been rather pleased with the fact that the almost 50-year censorship of the male member in fashion has succeeded in making the need for fig leaves completely redundant. 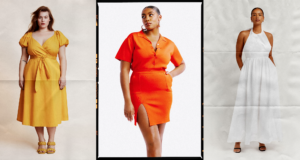