Congolese designer, Anifa Mvuemba, gave a preview of what catwalks might look like in a post-pandemic world with a collection using virtual models.

Mvuemba released the latest collection for her fashion brand, Hanifa, on Instagram live on Friday. During the show, the digital models sashayed down the runway with the designer’s outfits draped on headless, three-dimensional bodies.

The Pink Label Congo collection featured pants and dresses in vibrant colors and was described as the future of runway fashion by spectators.

Mvuemba, whose previous designs have been worn by celebrities such as rapper Cardi B, told Teen Vogue, she already had plans to go digital with her collection before various Covid-19 restrictions were put in place around the world.

She said in the interview with the fashion magazine that she had been working for seven months to create the computer-generated models, “Designing content using 3D models and now an entire collection has been a complete game changer for me. “It actually requires an even greater amount of attention-to-detail for the clothes to fit and look just right.” 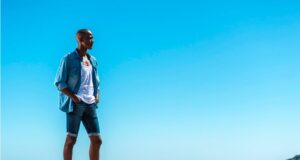 The rise of ugly fashion continues with men’s jean shorts