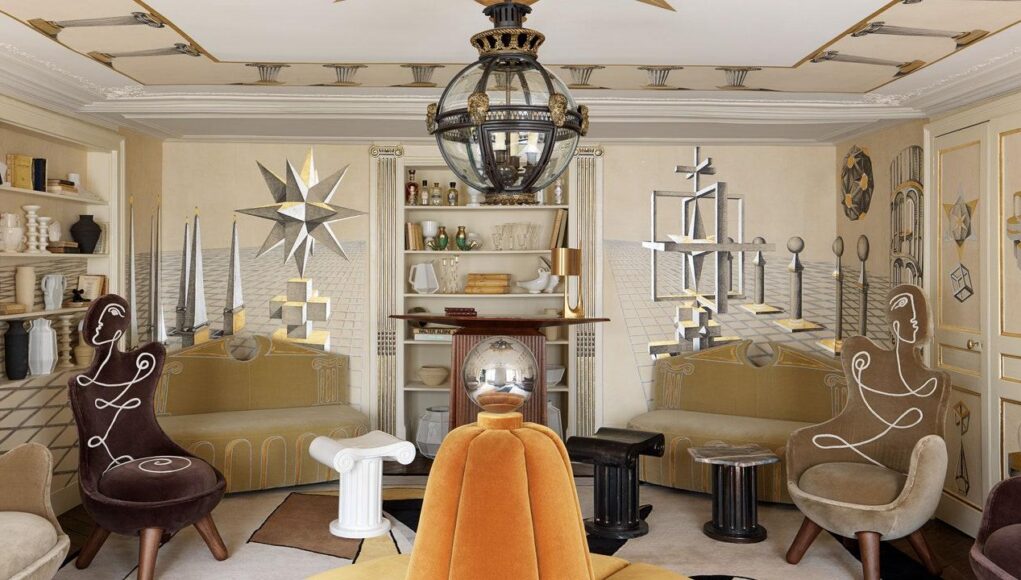 The de Gournay showroom on the Left Bank of Paris has a small flat upstairs where the team meets with its clients. Traditionally, the space was decorated with wallpaper from the company’s existing collections—until a eureka moment a few years ago. “We realized it was a great place to do something different, a total departure from what people think is de Gournay,” says company director Hannah Cecil Gurney, the daughter of brand founder Claud Cecil Gurney. She decided to ask top creative talents to come up with fantastical, one-off tableaux that would, in her words, “celebrate our artistry, show what we are capable of doing, and allow a designer to create what he or she likes, with no commercial side to it.” Meaning it’s not for sale. “This is the only place this wallpaper will exist.”

For the first two iterations, de Gournay tapped Alessandra Branca and AD100 Hall of Famer India Mahdavi. Now, for the third—debuting at Paris Déco Off, March 23 through 27—they called on French iconoclast Vincent Darré, challenging him to dream up a series of three non-repeating wallpapers that would be, as Gurney puts it, “transformative” and “joyful” and “fun.”

Over tea served in a set of delicate Empire porcelain at his worktable in Paris, Darré explained that he conceived the collection as a visit to a noble pavilion. First, one crosses a jewel-box courtyard—much like, he said, the one “across from the Petit Trianon at Versailles.” Framed with a grass-green trellis, the trompe l’oeil, he pointed out, is “very Parisian. My grandfather had one.” From there, one enters the drawing room, an ebullient Technicolor riff on chinoiserie. “I wanted it to be a bit faerie-esque, like a folly.” The theme is also a nod to de Gournay, since the company, founded in the 1980s, is rooted in the tradition of 17th-century Chinese wallpapers. Many of its offerings are still hand-painted on rice-paper parchment in China.

Finally, one walks into the surrealist salon—a room filled with stark architectural shapes, on the walls and as furniture, in silver, ivory, beige, and burnished gold. (The furniture is a capsule collection by Darré for de Gournay, available at the Invisible Collection.) “I’m crazy about the period of research of perspectives,” Darré said, pulling a worn, thin monograph of renderings from the Bourbon reign from his bookcase. “For me, these are bibles of 17th-century metaphysical objects,” he said, paging through the book. “I wanted to do something different, unexpected—things that have obsessed me forever. This project is like haute couture,” allowing him to “come up with things that are magical.” That, he has. degournay.com 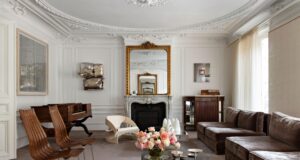 Step Inside a Historic Paris Apartment That Brims With Charming Details...