For many of us, this summer has felt like a reawakening. Bars and restaurants are open at full capacity. Weddings and dinner parties are back on. Hugs are happening, for now at least. Of course we know the Delta variant is hovering there, like a storm cloud on a sunny day, urging us to mask up and head back inside. Still, let’s not ignore this period of relative joy. And is there another color that can capture that collective glee as effectively as yellow?

Back in December, Pantone named Illuminating, a “bright and cheerful” shade, one of its two colors of the year. (The other was an exceptionally blah Ultimate Gray that summed up our collective sense of limbo.) In April, when AD Hall of Fame designer Kelly Wearstler debuted a collection of paint colors for Farrow & Ball, a lemony hue dubbed Citrona stole the show. And by June, as temperatures warmed and pop star Lorde released the video for her new single “Solar Power,” fans clamored to purchase her Collina Strada canary yellow look.

It’s no surprise that the sunny hue is making its way indoors, where yellow interiors are taking over. When New York magazine published designer Brock Forsblom’s minimalist Manhattan loft in June, we were gobsmacked by his entry and kitchen covered—floors, walls, and ceilings—in what he calls “van Gogh yellow.” Yes, the color used to paint fields of sunflowers seemed to capture the current mood perfectly. “It’s not art, it’s not conceptual; it’s just color,” he told the magazine of his all-over approach. Forsblom’s place brought to mind the study in Carol Bove and Gordon Terry’s Red Hook, Brooklyn row house, which AD100 designer Billy Cotton painted almost entirely in Farrow & Ball’s India Yellow as well as the living room Green River Project conjured in Rockaway, New York, tinted in a similar hue. The latter pulses with colors inspired by studio designer Aaron Aujla’s travels in India. “That color literally comes from my uncle’s place in Chandigarh,” Aujla said. “I think in the end we’re just trying not to see white walls.”

“I am actually having a yellow obsession right now,” Cotton said when we asked for his thoughts on the trend. “It has a truly enveloping effect, and it reacts really well to light, absorbing it into whatever shade you are working with.” Because of that, Cotton says, yellow interiors are best suited for rooms with ample sunlight. He also loves using the shade as an accent against a dark wall.

From the walls to the window panes to the chair rails, this highly-textured space is covered in Kelly Wearstler’s lemony Citrona paint, part of the designer’s California-inspired palette for Farrow & Ball.

A yellow hallway and a saffron-colored console area at Elizabeth Graziolo’s home in Hudson, New York. In this setting, yellows—which the designer recommends for petite spaces—take on a more classical feel.

For architect Elizabeth Graziolo, love of the hue has been a lifelong affair. Her firm is named Yellow House Architects, after all. (She even wrote her email responses in yellow.) “When used on walls, it transforms a room into a mood-uplifting space,” she explains. In her own Hudson, New York, home she used Farrow & Ball’s Babouche, in a flat finish, to amp up the bar area, and she loves using the hue to define petite spaces. “Yellow walls make them feel bigger and cheerier,” she says.

Amid the global pandemic, that uplifting quality is on many designers’ minds. “Yellow is often associated with positivity, optimism, sunrises, and new beginnings,” Graziolo says. And Cotton echoes the sentiment: “Especially after the darkness of this past year, we want joy and lightness. I can’t think of a color that is more associated with that!” 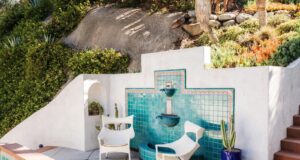