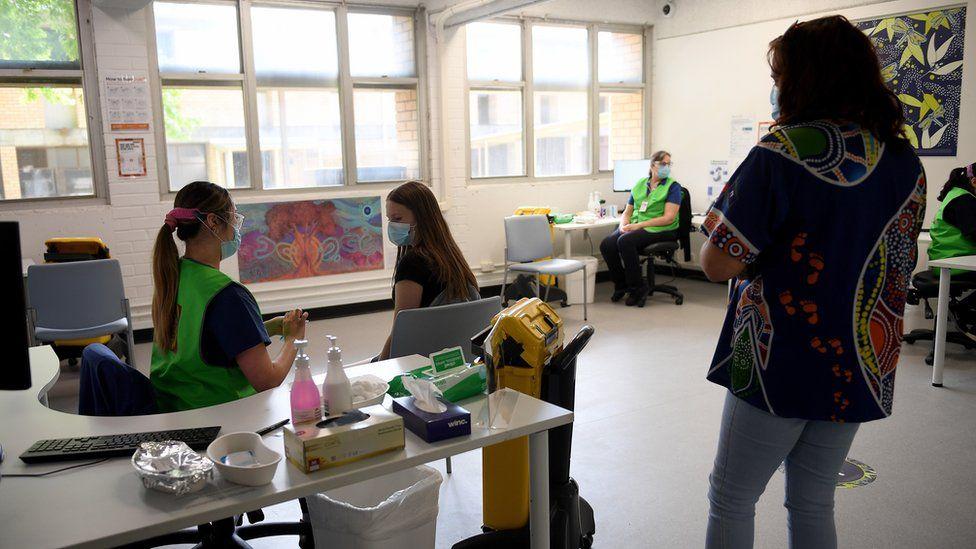 Australia will reopen its international border from November, giving long-awaited freedoms to vaccinated citizens and their relatives.

Since March 2020, Australia has had some of the world’s strictest border rules – even banning its own people from leaving the country.

The policy has been praised for helping to suppress Covid, but it has also controversially separated families.

“It’s time to give Australians their lives back,” PM Scott Morrison said.

People would be eligible to travel when their state’s vaccination rate hit 80%, Mr Morrison told a press briefing on Friday.

Travel would not immediately be open to foreigners, but the government said it was working “towards welcoming tourists back to our shores”.

Amy Hayes, who lives in the English town of Reading, Berkshire, and has not been back to Queensland in nearly three years, said it was “encouraging to see things moving in the right direction”.

“But I’ll believe the borders have reopened when I see it and hear the stories of stranded Aussies being able to get home uninhibited,” she told BBC News.

“Also, all my family and friends are in Brisbane and so although I might be able to fly to Sydney or Melbourne, what would be the point when the Queensland border is still closed with no indication of when it’ll open?”

“I’m just one of thousands of stranded Aussies,” Ms Hayes added. “My story is not unique at all. I’m fortunate in that I have not been subjected to the cruelty of having to grieve for a loved one overseas or in quarantine, or had any emergency to travel back for. I’m grateful every day for that.

“For me, and many like me it’s the everyday moments we are missing out on, having extended time away from friends and family and grappling with the erosion of our Australian identity.”

At present, people can leave Australia only for exceptional reasons such as essential work or visiting a dying relative.

Entry is permitted for citizens and others with exemptions, but there are tight caps on arrival numbers. This has left tens of thousands stranded overseas.

Mr Morrison said Australia’s mandatory 14-day hotel quarantine – which costs each traveller A$3,000 (£1,600; $2,100) – would be replaced by seven days of home quarantine for vaccinated Australians or permanent residents.

Unvaccinated travellers must still quarantine for 14 days in hotels.

Australian carrier Qantas responded by announcing it would restart its international flying a month earlier. It had already put flights to major overseas destinations on sale from 18 December.

Sydney, Melbourne and Canberra are currently in lockdown due to outbreaks of the virus.

That has helped prompt a surge in the vaccine uptake in recent months.

New South Wales – which includes Sydney – is on track to be first state to cross the 80% threshold, in a few weeks. Victoria – containing Melbourne – is not far behind.

But states such as Queensland and Western Australia have threatened to keep their borders closed until vaccine rates are even higher.

These states have managed to maintain Covid rates at or near zero, after shutting their borders to states with infections.

This is a hugely anticipated announcement for thousands of Australians both here and overseas. No doubt it’s an emotional moment for many, after nearly two years of isolation.

Australia’s strict border policy has been credited for its success especially early in the pandemic, but the Delta variant has changed everything.

Western Australia and Queensland are still going for an elimination policy, meaning they have been quickest to close their borders to other parts of Australia.

It’s a very different picture in NSW, the most populous state, where the policy has changed from elimination to vaccination.

All of that is going to make the practicalities of reopening international borders quite tricky.

Airlines have already said they’re not ready for the ramping up of services this reopening will require. And with so many details still vague in terms of restrictions and proof of vaccination, this could be a potential headache for border authorities too.

NSW or Victoria may allow their fully vaccinated residents to travel abroad and come back to home quarantine but Western Australia, for example, will most likely be reticent to do that and take on increased risk.

So you could have a scenario where it could be easier for people in some states to travel to London for a vacation than it is to go to Perth!

Key vaccination thresholds are also part of Australia’s broader plan to emerge from lockdowns and “live with the virus”.

Sydney – site of Australia’s largest airport – is due to come out of a 13-week lockdown on 11 October.

Tim Soutphommasane, an academic and former Australian race discrimination commissioner, told AFP news agency Australia had become a “fortress nation with the drawbridge pulled up to the rest of the world”.

“What we’re seeing now with this announcement of borders being reopened is akin to Australia re-entering the world, and it’s long overdue,” he added.

Do you want to travel to and from Australia? Have you been trying to do so for some time? Get in touch using the form below.

Please include a contact number if you are willing to speak to a BBC journalist. You can also get in touch in the following ways:

If you are reading this page and can’t see the form you will need to visit the mobile version of the BBC website to submit your question or comment or you can email us at HaveYourSay@bbc.co.uk. Please include your name, age and location with any submission.

How celebrities got into Australia when others couldn’t