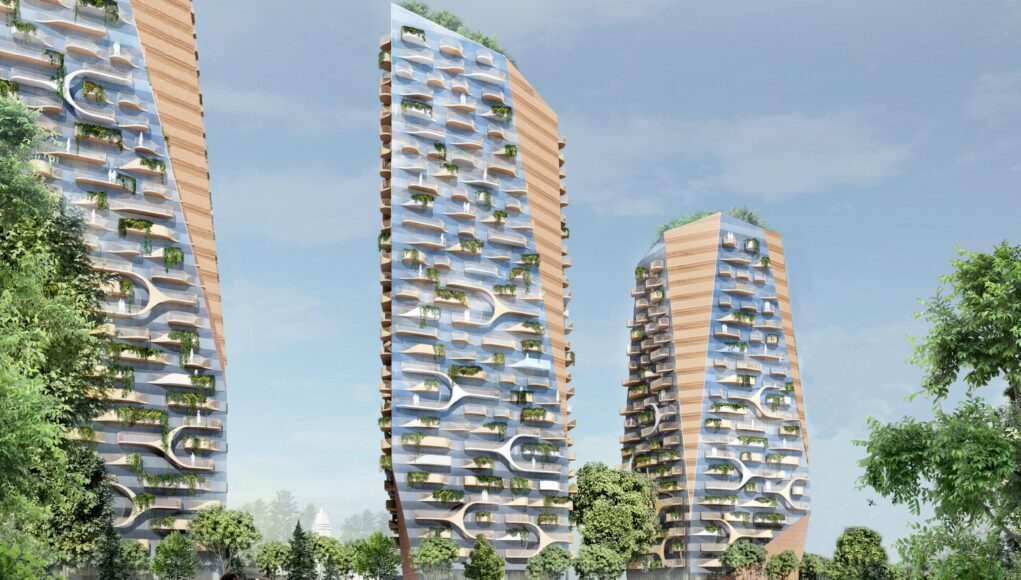 An unassuming strip of Squamish Nation reserve land in Vancouver, Canada, will soon become the site of an ambitious new C$3-billion (US$2-billion), 11-tower project called Sen̓áḵw. The mixed-use development is slated for completion in 2030.

Named for the ancestral territory the Squamish band was evicted from in 1913, the project—set under and around Vancouver’s iconic Burrard Street Bridge—is being billed as a “sustainable village” built on the bones of the former one. The Canadian Pacific Railway (CPR) set up a rail terminus on the site, but when they tried to sell the land in 1989, the Squamish argued it should be reverted to reserve status. After a long legal battle, they regained a portion of the original land in 2002. Since then, the Squamish Nation has been biding their time and considering various development options until the right moment.

Normally in Canada reserves are in more rural areas, so the opportunity to develop 10.48 acres of prime urban waterfront is a rare one. New federal laws enacted in 2018 allowing greater scope for First Nations to develop their own lands also inspired the Squamish’s decision. In December of 2019, the Squamish Nation voted in favor of a partnership with local developer Westbank, known for their luxury condominium towers like the Vancouver House designed by Bjarke Ingels.

The planned 6,000 new housing units on reserve land will be largely rental ones aimed at the “missing middle” in the midst of a housing crisis and a heated real estate market, and it will include several hundred for Squamish Nation members. The Nation hopes to generate up to $10 billion dollars in rental revenue that will be used to assist its members.

The design by Revery Architecture to pack 11 towers ranging from 17–59 stories into the tiny strip of land is also a unique one, and it is slated to be a car-free, green-friendly development. The conceptual drawings featuring curvilinear balconies overflowing with greenery and reflecting the surrounding environment were done in close consultation with the Squamish and include indigenous art and design elements from façades to structural core surfaces to suite entry doors and benches.

“We were inspired by the traditional villages of the Squamish Nation, their deep embrace of nature—the mountains, forest and water, their carving and weaving traditions, and cultural connection with salmon,” says Revery design principal Venelin Kokalov. The towers feature two different typologies: The “mountain” has an organic massing with abstracted balcony forms, and a second one is inspired by traditional long houses.