Home Decors & Furniture 5 Tips for Carving Out a Chic Entertaining Space in a Small... 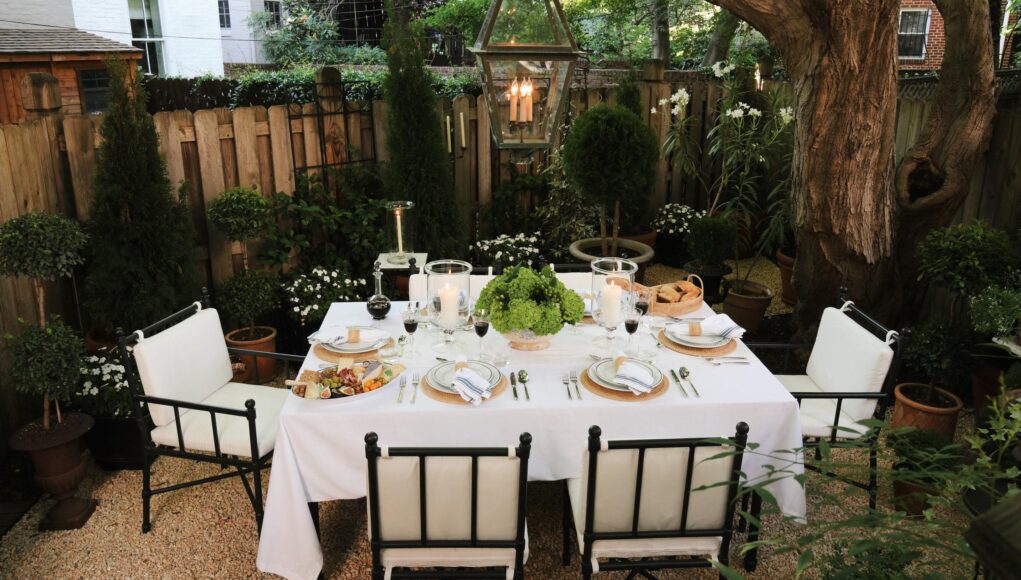 Every time fine artist and designer Josh Young of Josh Yöung Design House shares a snapshot of his Washington, D.C., town home with his nearly 100,000 Instagram followers, his penchant for well-styled and layered neutral spaces becomes more and more clear. This aesthetic translates to the home’s exterior, which features a lush backyard garden that evokes the quintessential country house experience—all the while being located a mere three miles from the White House.

When Young and his husband Ignacio Martinez moved from Chicago to Washington, D.C., last year, finding a home that also featured an outdoor space was a top priority. Previously, the couple had been living in a downtown high-rise. Upon relocating, they once again landed in a vibrant neighborhood. Their historic Capitol Hill town house also offered a promising backyard.

However, the existing outdoor area initially lacked panache—but Young and Martinez were up for the challenge. “Although the backyard was small, the layout was perfect, and we knew the space had potential,” Young says. The mismatched plants and awkwardly positioned patio would of course have to go. “It essentially wasn’t acting as anything,” Young says of the original setup. “Not a yard, not a patio, not a garden, nor a lounge area. It was lost and needed some serious TLC.” Young overhauled the yard with a few design upgrades and a suite of new accessories that helped transform it into a calming oasis in the heart of the city.

Dreaming of creating your own backyard getaway like this one? Keep these five key tips in mind.

Young frequently draws upon the six years he spent living in Milan when it comes to his design. “One of my favorite things about the courtyards, gardens, and parks in Milan is their use of pea gravel,” he says. “I love the warm neutral color, texture, and even sound of walking on it.” Although the couple considered opting for brick or tile flooring, the aforementioned gravel ultimately proved to be the winning solution. “Even though it seems like such a small and silly detail, having it really juxtaposes beautifully with the city surroundings and makes us feel like we’re in a countryside garden,” Young comments.

Pay tribute to your surroundings

Young’s current location, in the heart of D.C.’s storied Capitol Hill neighborhood, influenced his traditional approach to garden decor. “We sourced and incorporated a variety of vintage cast iron urns and planters, and were disciplined on keeping a neutral, calming palette of greens and whites when selecting plants and flowers,” he says. “The garden complements our home, built in 1885, but also feels fresh and is an extension of our interiors.”

Bringing In the Heights to the Big Screen