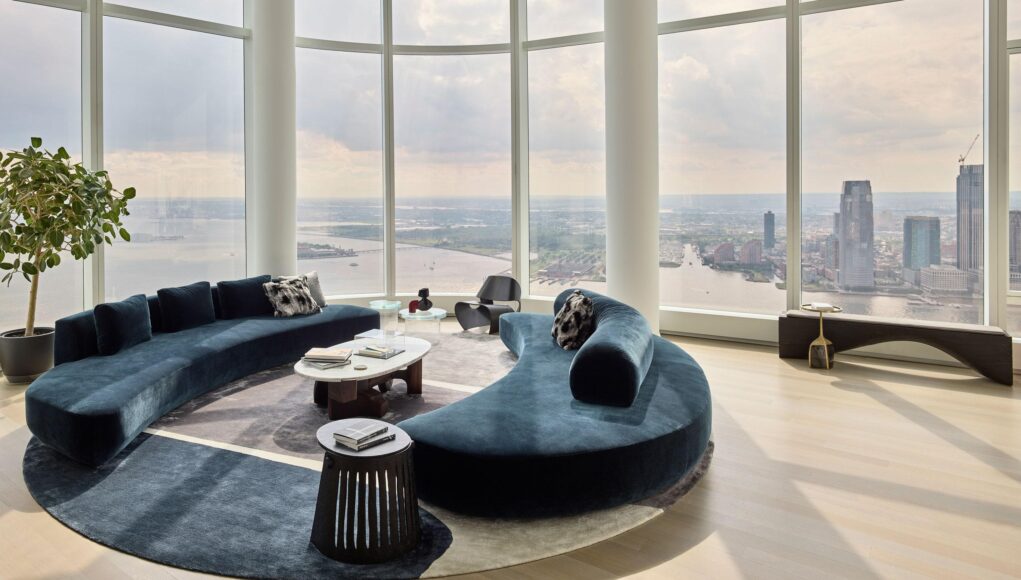 “This will not be like any typical New York City project,” interior designer Noha Hassan thought to herself when she first arrived at her clients’ 10,000-square-foot, five-bedroom, eight-bathroom duplex on the 63rd and 64th floor of a very high-rise building in the Financial District. “It’s truly a house in the sky, with unobstructed views all around.”

The owners, who had never before met Hassan, had fallen in love with her work and reached out through her website. “My portfolio resonated with them,” says Hassan of her clients, who have three kids. “They wanted something modern yet cozy.”

The large living room has an intimate fireplace seating nook. A 24-karat gold-plated LED light sculpture by Carrie Livingston doubles as art that brightens the area. Raphael Mazzucco’s painting Piano Girl hangs over the mantel. “This one really resonated,” says Hassan. “The client was making a joke that this is almost like his wife is playing the piano for him because she’s also a brunette.”

While the top floor is dedicated entirely to the couple’s suite—complete with one enormous bedroom, two closets, two bathrooms, a sauna, and a steam room—the children each have a spectacular room of his or her own. “We wanted the rooms to be something the children could grow into,” says Hassan, who eschewed conventional kid colors and furnishings for a sophisticated, optimistic palette and design pieces built to last. “I like my rooms to feel a little timeless,” says Hassan.

“The couple also liked that I always like to do something a bit unexpected in my work,” she adds. That made Hassan the perfect match for this curveball of a home. Literally. “Nothing is straight there. Very few rooms have straight walls, but that’s what makes it interesting. I love a challenge.”

Her approach? “I’m a modernist, and I’m a minimalist,” notes Hassan, who sought out clean lines juxtaposed with eye-catching standouts. Born in Egypt, the designer has lived in Saudia Arabia, Luxembourg, Brussels, and London before dropping anchor in New York. Her global influence can be found in her careful attention to mixing cutting-edge materials with remarkable textured and patterned fabrics. “I selected everything from scratch,” she notes. One particularly striking detail was her involvement with the Miniio dollhouse and furnishings included in the couple’s daughter’s room.

Despite all the attention she paid to interior finishes, the home’s unique setting inspired Hassan to have things pared back. “We had to keep the exterior views as part of the interior story,” she says. “You can’t go crazy-overboard with the design.” Nothing could compete with the wraparound skylines—except perhaps the saltwater aquarium installed along one of the homeowners’ immense dining room walls. “The husband insisted,” says Hassan. “And now, even though the project is finished, I still like to visit and come see how the fish are doing.”

Hassan worked to create a series of playing, sitting, and storage areas in one very large room. Says the designer, “The playroom still had to feel sophisticated because you can see it from all angles—from the media room, the living room, the gallery entrance.” Highlights include a pure white piano by Sauter, a trio of Elodie Blanchard’s felt-scrap forest sculptures (named Claude, Eva, and Catherine), and Puffo stools by Gufram.

How to End a Friendship While Protecting Your Heart