Home Technology iPhone cameras just got a lot better, thanks to iOS 14. Here’s...

I’ve been using iOS 14 since Apple announced the beta version back in June at WWDC. Now Apple’s newest operating system is out of beta (here’s how to install iOS 14 to your iPhone if you haven’t yet), and we’re still discovering new features to love about it, including widgets for the home screen, picture-in-picture video, the Translation app and more. One of my favorite discoveries is a handful of new tools and improvements to the iPhone’s camera. New camera features usually only come out when a new iPhone is released, but Apple has been able to add more camera functions through software updates alone.

The new features let you take pictures faster and control the exposure more easily. They can also help you hold still while taking Night Mode photos. These are all improvements that make it easier to use the Camera app. If you want a step-by-step guide to each of the new iOS 14 camera features, take a look at the video below.

If you move your iPhone too much, a pair of crosshairs (one yellow and one white) will appear on screen. You can then adjust the way you’re holding the iPhone until the two crosshair guides meet up. As a result, the cameras will be more steady and able to take sharper photos. 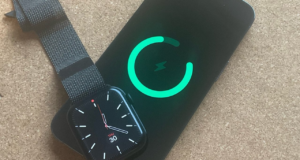 Apple wants an iPhone to charge other devices through the screen...