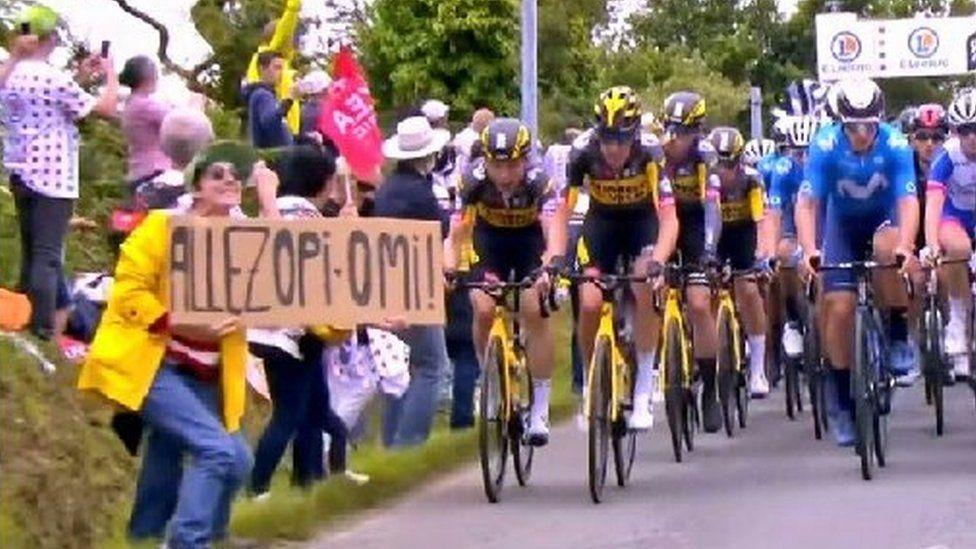 The peloton was 45km (28 miles) from the end of the first stage, when her sign clipped German rider Tony Martin.

He fell to the ground and caused dozens of other riders to follow suit, in one of the tournament’s worst ever crashes.

The woman, 31, was also ordered to pay a symbolic one euro fine to France’s professional cyclist association.

The identity of the woman, who was a spectator at the elite race, was withheld after she was targeted by a torrent of online abuse, the AFP news agency reported.

Video footage of the incident, which took place in June, has been shared widely online.

The woman can be seen holding a sign with “granny and granddad” written in German. She is looking away from the peloton coming towards her and does not see them approach, while holding her sign too far into the road.

As a result of the crash, two riders had to pull out of the Tour completely and another eight riders were treated for injuries.

The crash held up the race, which was between between Brest and Landerneau in north-west France, for five minutes, while bikes and riders were untangled and cleared from the road.

Several people eventually had to pull out of the race, including Spain’s Marc Soler, who broke both arms.

The woman turned herself in to police custody days later.

Prosecutors had earlier requested a four-month suspended prison sentence for the woman, accusing her of endangering lives and causing unintentional injuries.

In court, prosecutor Solenn Briand acknowledged that she’d expressed regret, and recognised “how dangerous” her conduct had been, according to AFP.

Since the mass pile-up, Tour director Christian Prudhomme has adopted a conciliatory stance.

“She did something daft, she’s no terrorist,” he told reporters in October. “We just want people to take care when they come to the Tour and remember they are there to see the champions and not to get on television.”

The Inside Story Behind Dior’s Latest Runway Set Design