PRESIDENT DONALD TRUMP has raised more money in a month than Joe Biden for the first time since April, as both campaigns announced July hauls that also indicate a close race in terms of cash on hand.

The Trump campaign announced Wednesday that it, along with the Republican National Committee and their joint fundraising efforts, raised more than $165 million last month – eclipsing the presumptive Democratic nominee by about $25 million. Biden’s $140 million fundraising total for July included an average online donation of about $35, according to a news release.

Trump’s advantage in cash on hand, however, appears to be dwindling. The Trump campaign announced Wednesday that it has more than $300 million in cash on hand, while the Biden campaign said it has $294 million in cash reserves. Official filings with the Federal Election Commission last month showed that the Trump campaign had a cash-on-hand advantage of about $58 million at the end of June, according to the Campaign Finance Institute, a division of the National Institute on Money in Politics.

Both campaigns appear to be using their growing fundraising strength to broaden their presence on the airwaves. Trump launched two new TV ads on Monday in North Carolina, Arizona, Florida and Georgia in English and Spanish, while Biden is making his own massive advertising buy in reserving a record $280 million worth of ads in 15 states – including both swing states and tougher-to-win states such as Texas and Georgia, according to a campaign memo released Wednesday. 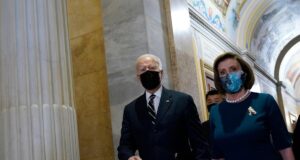