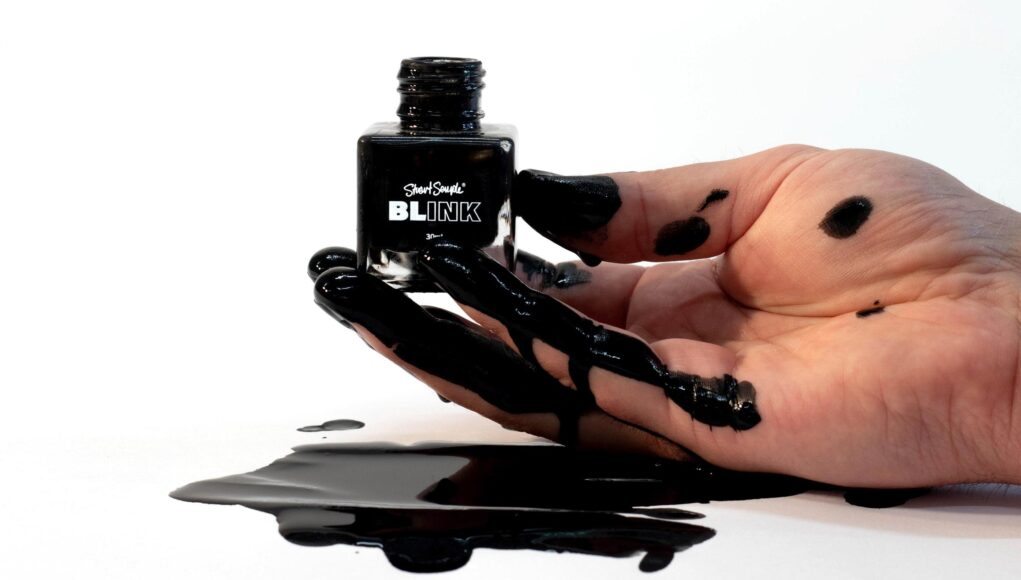 At this point in history, you’d be forgiven for assuming that humanity had finished exploring the furthest frontiers of color. And yet, newer, richer pigments keep popping up. Technological breakthroughs in recent years have led to a new whitest white, blackest black, and even a whole new blue to use, each with its own set of implications in fields ranging from art and design to environmental science.

Now, artist Stuart Semple says he’s developed the blackest ink available. Fittingly called Blink, the ink uses a proprietary (and secret) formula that functions as a stunningly deep and rich matte black. When glimpsed side by side, black inks made by the likes of Speedball, Kuretake, and others literally pale in comparison.

While Semple’s arrival at Blink may seem like a one-off endeavor, its inspiration comes from a bit of competition and controversy. The pigment game first changed with Surrey NanoSystems’ development of Vantablack for use on satellites. The substance absorbs a remarkable 99.965% of all visible light, giving it the power to transform three-dimensional objects into de facto optical illusions (including architect Asif Khan’s striking use of the paint to shroud a pavilion for the 2018 Winter Olympics in total darkness).

Though technically impressive, Vantablack’s use in the art world was essentially controlled by Anish Kapoor, who was granted exclusive artistic rights to the paint back in 2016. That apparently irked Semple, who poked fun at the situation by launching the “world’s pinkest pink.” He soon got more serious about democratizing access to a profoundly black pigment, however, when he and his team introduced Black 3.0 in 2019. While not quite as absorbent as Vantablack, this dense acrylic paint had the distinct advantage of being readily available to anyone with $23.99 to spend.

Blink black is so dark because it absorbs almost 100% of emitted light.

Getting from Black 3.0 to Blink wasn’t as easy as one might assume, either. More than 1,000 different iterations of the ink were given to artists for testing purposes, and consolidated feedback from them informed its development. The result is an incredibly opaque, waterproof ink that, while certainly an indulgence, has its practical benefits.

“Anything you’d ordinarily use black ink for, like outlining, will be better now,” Semple told Fast Company of his team’s creation. “I think anything on paper that needs a good nonreflective super black will look great.”

So whether you’ve been curious about an ink that can feel like staring into a black hole, or you’re just after a reliable, waterproof black ink that makes an impact, it looks like Blink may have set a new standard. If recent history of the art and design world’s quest for a blacker pigment holds true, however, don’t be surprised if there’s more ink to be spilled on the subject soon enough.

Squid Game Season 2: Everything We Know