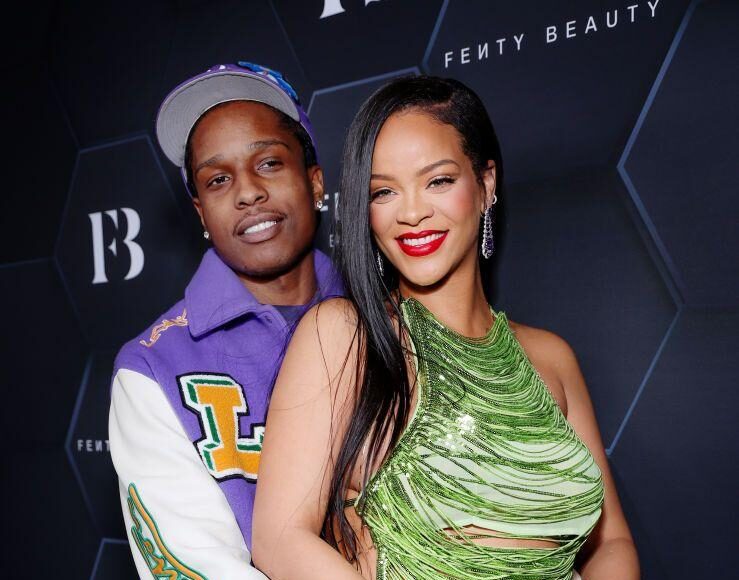 On Friday night, Rihanna and boyfriend A$AP Rocky showed up for the photocall for her Fenty Beauty and Fenty Skin party held at Goya Studios in Los Angeles looking adorable, in love, and thrilled to be expecting parents. The couple smiled and embraced one another for the cameras on the red carpet.

Rihanna was wearing another outfit that celebrated her baby bump, a shredded green halter top with a backless design, over a pair of pants of the same material in a silver to purple ombre pattern. Rihanna’s jewelry for the night included amethyst drop earrings, a silver bracelet with violet stones, and a series of Messika rings, including their Wild Moon ring, the Bague Diamond Catcher, and the Messika Bague Exotic Charm ring.

For her makeup, the singer and beauty mogul wore a bright red lip, shimmering gold eye shadow, and her long hair down and parted to the side.

A$AP Rocky wore Louis Vuitton, a letterman jacket with a matching shirt, and a purple Yankees hat to match his girlfriend, and a pair of shredded denim jeans with green sneakers.

The Savage x Fenty clothing brand is launching retail stores this year, with flagships in Los Angeles, Houston, Philadelphia and Virginia, according to Forbes, and plans to open ten stores this year. The Eau De Parfum event was attended by Tinashe, Michelle Young and Nayte Olukoya, Evan Ross, and Terri Seymour, and a number of other celebrities.

Rihanna and Rocky announced their pregnancy at the beginning of February, releasing photos of them walking through Harlem. In the photos, Rihanna wore a vintage Chanel coat open to reveal her baby bump draped with jewels. The couple were first linked in November of 2020, though they have been friends for years and even toured with one another long before starting a public relationship. 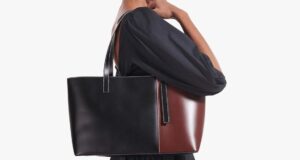 Feels Like a Steal: An Elevated Leather Tote That’s Less Than...