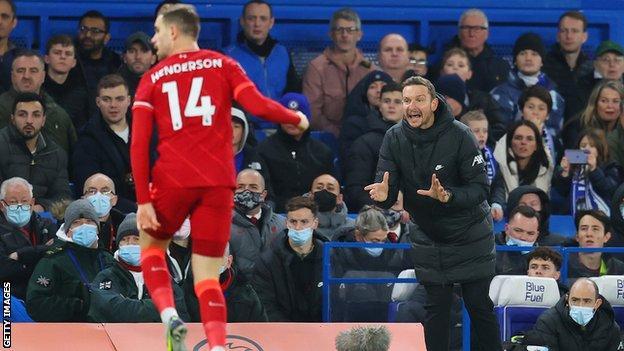 Liverpool assistant coach Pep Lijnders is the latest member of staff isolating because of coronavirus as the club seek to postpone Thursday’s Carabao Cup semi-final first leg at Arsenal.

The first team training centre has been closed for at least 48 hours because of a “rapidly growing number” of cases.

The decision on whether the game is postponed is “still pending”.

Liverpool – further stretched by the departure of Mohamed Salah, Sadio Mane and Naby Keita for the Africa Cup of Nations – cancelled a news conference due to be led by Lijnders on Wednesday.

The Reds applied for the postponement on Tuesday, issuing a statement saying the club wanted to give “as much notice as possible” to travelling fans for Thursday’s 19:45 GMT kick-off.

In a new statement on Wednesday, they said: “As a result of the outbreak and the suspension of preparations, as well as other illnesses and injuries recorded within the squad, the club submitted an application to the EFL for the postponement of Thursday’s tie with Arsenal, with the news of Lijnders’ positive result coming after the request was lodged.

“The outcome of this application is still pending.”

Liverpool are due to host Shrewsbury Town in the FA Cup third round on Sunday (14:00) before the second leg against Arsenal at home on 13 January.

Chelsea host Tottenham in the other Carabao Cup semi-final on Wednesday (19:45 GMT).

The latest round of Premier League testing showed a first week-by-week decrease in positive Covid tests for eight weeks.

There were 94 new cases among Premier League players and staff from a total of 14,250 tests in the seven days up to and including 2 January – down from a record 103 cases over the previous seven days.