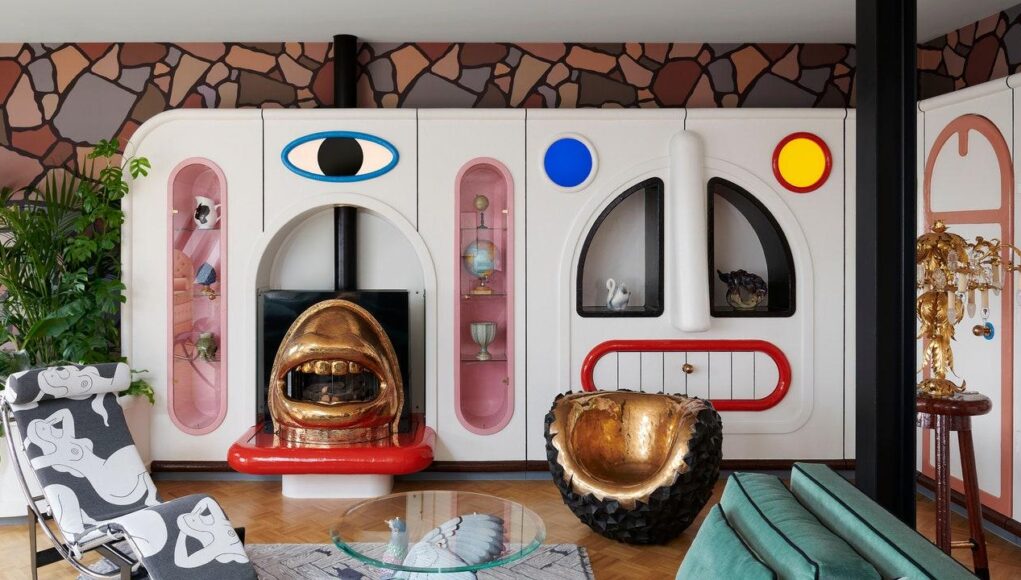 There comes a time in life when you’re exposed to clown culture. For me, it started during my early childhood with Raggedy Ann and Andy dolls, and then I moved on to The Big Comfy Couch. After that phase, I didn’t think much about clowns—in fact, I downright ignored them the moment I hit puberty. But during the pandemic, I found a new sense of exhilaration in the art of clown memes. At the same time, I was also redecorating my apartment, and the wiggle trend had me in a chokehold. When I finally welcomed the checkerboard pattern, I discovered a MacKenzie-Childs collection from the ’90s called Circus that felt like it had been made for me all along.

As all of these fun objects found their way into the corners of my home, I began wondering if it was becoming a little too fun and loud. My intent was to curate a space that felt more alive, but was I subconsciously exhibiting clown behavior instead? (Some might say if the red nose fits.) The closer I looked at my Vetri Murano lamps, the more the pink swirls reminded me of the hypnotic stripes that lined circus tents. I initially thought I was evoking Gwen Stefani’s version of Wonderland through the looking glass in “What You Waiting For,” but perhaps I was mistaken.

It’s also worth mentioning that I was literally playing musical chairs with a new rotation at my dining table every few months. It was like the dizzying sensation of looking out from the carousel while it’s spinning. Perhaps I had stayed on the ride too long, and the wheels in my head were still going round and round. The unspoken truth is that you’re either a spectator or a performer at the circus, but carnivalcore invites us all to participate in reclaiming our innocence by latching on to carefree ideals that break away from the real world.

I won’t take credit for coining the term: It’s been described as an aesthetic that channels the joy of the carnival experience through a playful atmosphere. Cara Delevingne’s Los Angeles home is a prime example of this nowstalgic trend with its tented poker room, ball pit, trampolines, costume room, and an attic party bunker that might be a dungeon. (In my humble opinion, her aesthetic is more channeling the energy of “Circus” by Britney Spears.) The singer Paloma Faith also dabbled with elements of the circus for the theme of her child’s bedroom, which features an original hand-painted mural amongst other quirky things like striped curtains, animal prints, and games strategically scattered around.

Nicolò Bini, the architectural designer behind Cara’s home—as well as the dizzying property that the actress and model once shared with her sister, Poppy—likes to refer to this maximalist moment in design as ushering in the “house of fun.” He views the rise of the carnivalcore trend as a modern reinterpretation that reminds him of the trippy undertones within Lewis Carroll’s Alice’s Adventures in Wonderland, noting how there’s also a mischievous side to such a whimsical theme. As Nicolò further explains, “It has to do with nostalgia and bringing aspects of childhood, fantasy, innocence, and playfulness into our homes, which are now becoming real sanctuaries.”

The home is no longer just a place to sleep—it’s a dynamic space to live out our dreams, and our interiors are a reflection of that. In regards to contemporary expression, Nicolò says, “There’s so much to be done to create environments that really speak to the purpose.” With a wealth of references to choose from, themes can be spread out throughout a home as a sequence of spaces with special attention on the transitions to ensure that a cohesive story is being told.

Last year, the underwear brand Parade unveiled a circus-themed retail store in New York City that further supports my Big Top theory that carnivalcore is the next progression of whimsical decorating. For those that are tardy to the party, #clowncore started trending on TikTok during the pandemic, masking as a new form of “loud queer expression.” Back in 2015, the subculture emerged as a nightlife phenomenon. Cami Téllez, founder and CEO of Parade, had a kaleidoscopic vision for the space to function as an immersive and sophisticated playland where their community could “come and color outside the lines with us” and bask in the empowering feminine energy.

Taking design cues from the ’60s and ’70s, Cami worked closely with the designer Xavier Donnelly to take the traditional retail experience in a maximalist direction. Together, they curated a fantasy world of fun and whimsy by playing with scale and color, and adding a touch of sensuality and surrealism. Cami credits the artists and designers Ellsworth Kelly, Pierre Yovanovitch, Verner Panton, and India Mahdavi for influencing the accenting features, which include a technicolor archway, life-size circus tent, geometric building blocks, and a claw machine full of free mystery products.

With the disco ball tent inside the space, Cami’s idea was to offer a new perspective on what a circus tent could look like in the future. In many ways, it stands as a symbol for escapism and the desire to envision new worlds. As Cami explains, the general concept of the circus tent has been a major source of inspiration for Parade’s entire brand ethos from the logo design to the signature colorway. “In a category that has traditionally been about one-note sexiness, we really wanted to make it about full spectrum color and celebrating who you are today,” she says. “I always say that at Parade we take fun seriously.”

The designer Martin Brudnizki points out the theater of the circus translates so well to interiors because they share a sense of drama. “Many designers start out with theater design, from Cecil Beaton to Oliver Messel or Tony Duquette,” he says. “There is a natural similarity between theater design and creating interiors and a long history of using circus techniques, from thick red stripes to fringes, animal motifs, and tents.”

This is where the tented room enters. For centuries, they have provided a touch of luxury to domestic spaces draped with fabric walling and a sense of grandeur. For anyone confronted with a small space without interesting features, Martin recommends tenting it—there’s simply no better way to create a fun, theatrical atmosphere within the home. “Like the circus, [tented interiors] create a feeling of escapism, bringing to mind the idea of traveling to far away countries and staying in campaign tents full of furniture,” he says. “From a purely practical standpoint they also offer an easy and effective way of transforming a room and doing so in a very tactile manner.”

Martin argues that “there’s a time and a place for the circus to enter your home.” He encourages clients to “use a motif rather than commit to the full look,” referencing Beaton’s circus-themed bedroom in Ashcombe, U.K., as “peak carnival-chic.” Although it’s perhaps a step too far for him, Martin admires anyone who is that bold and unafraid with design. “It sort of eschews any sense of being cool by being unashamedly about color, pattern, and joy,” he adds.

I’m fully aware that the terms circus and carnival are not to be used interchangeably as they are different forms of entertainment with their own distinct histories and traditions, but they do share many of the same visual elements like rainbow colors, striped patterns, and harlequin prints. The traveling carnival is probably what most of us are familiar with as many of them have circuses along with all the clown decor. The carnivalcore aesthetic includes an enchanting spectrum of primary colors, wiggly shapes, and patterned prints.

Similar to an aerialist on a trapeze, leaning into carnivalcore takes a certain amount of gusto to pull off without a hitch. Much like Cara Delevingne, soon you too will be the ringmaster of your own domain. Always remember, the gag is that you want your guests laughing with you, not at you.

Welcome to the world of wonder, are you ready for the show?

Daniel Arsham Teams Up With Tiffany, AD Hosts an Exhibition in...