Home Articles Attention Everyone Wondering Who the Pufferfish Is on ‘The Masked Singer’! We...

Honestly, nothing can be as sinister as The Masked Singer’s Egg costume, but this one comes close, and I can only assume producers unearthed it from the deepest and most baffling corners of the deep sea. Anyway, clearly some poor, innocent celebrity is trapped inside that thing’s giant puffy head, and it is our civic duty to help them GTFO. In other words, the time has come to theorize about who’s behind the Pufferfish’s puffed-up mask—and step one is analyzing allllll the clues.

First up, we have the above Instagram clip introducing us to the Pufferfish. Some things about Miss Fish immediately jump out, including and probably limited to:

Next up, we have the official Clue Package from The Masked Singer YouTube account, which—side note—is a harrowing place that absolutely no one should visit unless their personal kink is, like, singing fruits and vegetables. Anyway, there’s a ton to work through from this video, so listen up!

Straight up, there is only one person on this list so far. And that person is the absolute LEGEND known as Toni Braxton. She’s won Grammys, she’s won Billboard Awards, and in many ways she’s probably too cool for The Masked Singer, but the internet is convinced she’s currently trapped inside the Pufferfish. Why? Mostly based on Toni’s unmistakable voice.

On top of similarities in singing voice, the Pufferfish’s clues from The Masked Singer’s Clue Package simply add up! First of all, “Guitarra” is the Spanish word for guitar, and as fans have noted, Toni had a single named “Spanish Guitar.”

And then there’s the boomerang clue. In case you weren’t aware, Toni has multiple songs on the soundtrack to the movie Boomerang. It’s undeniably her! Just ask Twitter, which has pretty much lost all chill.

So, why would Toni choose to go on The Masked Singer? Typically, celebs go onto the show because they’re promoting a project/movie/TV show/album, and we know that Toni just dropped her new vegan body care line:

In other words, it kinda makes sense that she’d do a competition show right now! Anyway, go ahead and watch The Masked Singer tonight (if you dare), where Mother Nature is going to be unmasked….check out theories about who she is, below! 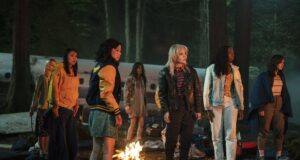 Everything We Know About ‘Yellowjackets’ Season 2