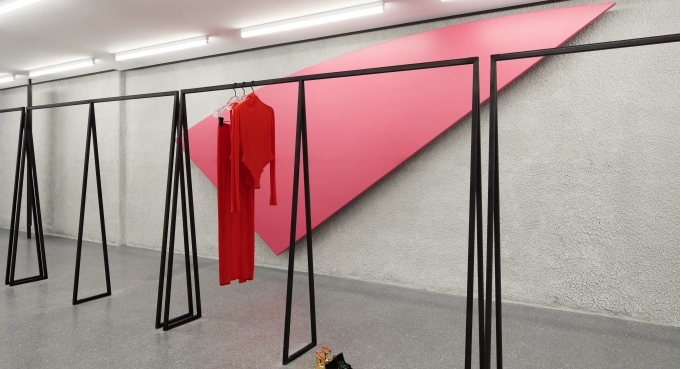 Facebook
Twitter
Google+
Pinterest
WhatsApp
A sensation in U.S. since the early 1980s, Alaïa is back with a New York City store that celebrates the American art and design scene.
The sleek, gallery-like boutique at 149 Mercer St. in SoHo displays works by Robert Rauschenberg, Mike Kelley, Jonathan Horowitz and Donald Judd, whose foundation is a stone’s throw away.
It opens Saturday amid an accelerated retail push for the Richemont-owned fashion brand, which is gunning to build direct-to-consumer channels to account for up to 70 percent of the business over the next three years, according to Myriam Serrano, Alaïa’s chief executive officer.
“We want to build a close relationship with our clients,” the executive said, disclosing details of the Manhattan store exclusively to WWD. Historically a wholesale-driven brand, Alaïa now counts eight freestanding boutiques in the world, five shop-in-shops in Europe and Japan, plus six boutiques operated with partners in Korea and China.
British architect Sophie Hicks conceived the minimalist interior of the Mercer Street store, as she did for Tokyo and Shanghai. The other Alaïa boutiques are in Paris, London and Dubai.
A high-profile boutique in Paris on the Rue du Faubourg Saint-Honoré, the site of an Alaïa fashion show last July, is slated to open in September 2024, with Serrano hinting that this new “emblematic address,” catty-corner to the historic Hermès flagship, will create “a journey through Alaïa’s way of life, couture and style.”